Senators’ Batherson says he is ‘co-operating’ with Hockey Canada investigations 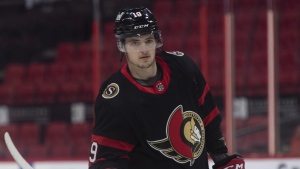 Ottawa Senators right wing Drake Batherson watches a play during warm-up prior to an NHL game against the Toronto Maple Leafs, in Ottawa, Saturday, Jan. 16, 2021. Batherson says he is co-operating with investigations into allegations of sexual assault involving players from the 2018 Canadian world junior team. THE CANADIAN PRESS/Adrian Wyld

Batherson spoke to reporters Thursday as the Senators opened training camp and said he would have no further comment on the investigations.

Hockey Canada, the NHL and police in London, Ont., are investigating allegations that a woman was sexually assaulted by eight players, including members of the 2018 world junior team, after a gala celebrating the team's gold medal.

Batherson and Senators forward Alex Formenton were members of that team.

The allegations have not been tested in court.

Batherson was asked why he hasn't released a statement proclaiming he was not involved in the alleged incident, as some others on the team have done. "No comment," he said.

The alleged incident, along with another allegation involving the 2003 world junior team, has put Hockey Canada under intense scrutiny. Current and former members of Hockey Canada's brass have been ordered to testify in front of a parliamentary committee on Oct. 4. It will be the third time leaders of the sport's governing body have been called to Ottawa to testify.

Asked for his take on hockey culture, Batherson said he is "living the dream."

"I'm having a blast every day, so I can't complain," he added.

Formenton is a restricted free agent, and general manager Pierre Dorion said he will not be in camp until he agrees to a new contract.

Dorion said the ongoing investigations have not affected Ottawa's negotiations with free agents.