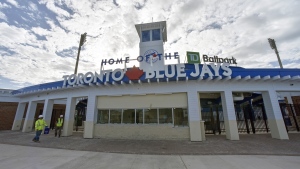 Several players and staff members on the Toronto Blue Jays have tested positive for COVID-19, a source has told The Canadian Press.

The source confirmed the news on condition of anonymity because the team has not officially announced the positive cases.

The developments came less than a week after the Blue Jays shut down their spring training complex in Dunedin, Fla., after a player presented symptoms consistent with the virus. Last Friday, the team said personnel at the facility underwent testing per protocols established by its medical team and Major League Baseball.

Sportsnet's Shi Davidi was the first to report the positive COVID-19 test results on Wednesday afternoon.

MLB announced Tuesday night that the regular season - trimmed to 60 games from the usual 162 due to the pandemic - will be played in empty ballparks starting July 23 or 24, with teams scheduled to report to camps by July 1.

Most teams intend to work out in their regular-season ballparks but the Blue Jays' plans remain unclear.

Specifics on the exact number of positive COVID-19 cases and arrangements the team has made will likely be announced at a news conference expected on Friday.

Anyone entering Canada for non-essential reasons must quarantine for 14 days, and the U.S.-Canada border remains closed to non-essential travel until at least July 21.

It also remains unclear where the Blue Jays will play home games this season. A message left with the team was not immediately returned.

Major League Baseball has submitted a plan to the Canadian government to play in Toronto this year and health authorities are examining it.

Anna Maddison, a spokeswoman for the Public Health Agency of Canada, said Wednesday the restart plan is being reviewed.

“The resumption of activities in Canada must be undertaken in adherence to Canada's plan to mitigate the importation and spread of COVID-19,” Maddison told The Associated Press.

“The Public Health Agency of Canada has received, and is currently assessing, a restart plan from Major League Baseball,” she said.

Earlier Wednesday, all-star outfielder Charlie Blackmon of the Colorado Rockies became the first MLB player known to have tested positive for the coronavirus.

A source confirmed the test result to The Associated Press on condition of anonymity because there was no official announcement. The Denver Post said he was one of three Rockies players to test positive for COVID-19.

The NBA and NHL, which are both planning to resume play next month, have also had players with positive test results in recent days.

While some positive cases were expected in pro sports now that athlete testing has ramped up and more sports are returning, anxiety has been heightened of late due to a rise in cases throughout parts of the United States.

The Blue Jays' training facility is in Florida, one of several southern states that have seen huge spikes in COVID-19 cases.

The Toronto Raptors, Canada's lone NBA team, have resumed training in Fort Myers, Fla., ahead of the league's restart next month in Orlando.

The NHL, meanwhile, is planning a hub city approach that does not involve travel back and forth between the U.S. and Canada. Vancouver, Toronto and Edmonton are among the contenders to be selected host cities by the league.

This report by The Canadian Press was first published June 24, 2020.

Can confirm a number of #BlueJays players and staff in Dunedin have tested positive for COVID-19.@ShiDavidi on it first.