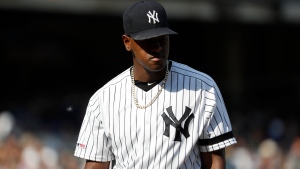 New York Yankees starting pitcher Luis Severino walks back to the dugout during the fifth inning against the Toronto Blue Jays of a baseball game, Sunday, Sept. 22, 2019, in New York. (AP Photo/Michael Owens)

NEW YORK - Luis Severino struck out nine over five scoreless innings for his first win of the season, and the New York Yankees hit three home runs as they beat the Toronto Blue Jays 8-3 on Sunday in their regular-season home finale.

New York (102-55) moved 47 games over .500 for the first time since its record-setting 114-victory season in 1998. The AL East champions clinched home-field advantage in the AL Division Series starting Oct. 4 and are competing with Houston for the top record in the AL. New York went 20-0-3 in series at home since losing two of three to the Chicago White Sox in mid-April.

Aaron Judge put the Yankees ahead two batters in with a 420-foot homer to left-centre that went off the end of his bat, his 26th homer this season and 14th in his last 29 games. Brett Gardner added a three-run drive later in the inning and DJ LeMahieu made it 6-0 with a two-run homer in the second.

Severino (1-0) has pitched nine scoreless innings this season. He made his debut Tuesday after recovering from a lat injury suffered while warming up for his first spring training start.

He allowed three singles and a hit batter while walking none, throwing 54 of 80 pitches for strikes. He induced 13 swings and misses, 11 on fastballs and two on sliders. Looking ready for the post-season, Severino threw 46 fastballs that averaged 96.5 mph and topped out at 98.7 mph. He mixed in 18 sliders and 16 changeups.

A 25-year-old right-hander who went 19-8 last year, Severino figures to get one more start before the playoffs.

LeMahieu has set career bests with 26 homers and 99 RBIs in his first season with the Yankees following eight in the NL. Gardner, New York's longest-tenured player, also has set career highs with 27 homers and 72 RBIs.

Giancarlo Stanton was 0 for 1 with a walk and a sacrifice fly, leaving him 4 for 10 with three RBIs since returning from a knee injury.

Toronto opener Wilmer Font (2-3) gave up four runs in the first and was followed by Trent Thornton. Former Yankee Billy McKinney hit a two-run homer off Tyler Lyons in the seventh and a solo drive against Nelson Cortes Jr. in the ninth. With 11 homers, McKinney became the 13th Toronto player with 10 or more, tying the record set by New York this year.

New York is 54-20 against the AL East with two games at Tampa Bay left, on track for the best record for a team within its division.

Yankees third baseman Gio Urshela turned to chase Randal Grichuk's flare into left in the first and bumped right into second base umpire Joe West. Urshela is hitless in his last 16 at-bats.

Claimed on waivers from the Yankees on Friday, Breyvic Valera entered at second base in the sixth in his Blue Jays debut.

Toronto batters reached double digits in strikeouts for the 15th time in 21 games, whiffing 15 times for the second straight day.

Yankees: DH Edwin Encarnacion (left oblique) and C Gary Sanchez (left groin) could return for the final regular-season series starting Friday at Texas, though manager Aaron Boone said there was an outside chance Encarnacion could play Wednesday at Tampa Bay. ... CF Aaron Hicks (right elbow flexor) is up to 90 feet in his throwing program as he tries to avoid Tommy John surgery but is doubtful for the post-season.