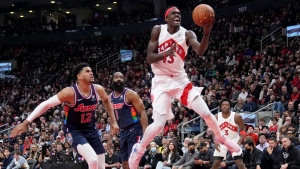 Siakam was on his way to 34 points in his best playoff performance of his career, and he was working hard for every one of them, attacking Embiid all night long.

A game after going scoreless in the second half, Siakam turned the tables on the first-round playoff series, lifting Toronto to a 110-102 victory to avoid elimination and force a Game 5.

“Resilience. He's always been a resilient player,” teammate Thaddeus Young said. “He's always gonna fight through adversity. He knows his game. He knows how to bounce back and come back from having not-so-good games. That's what he did.”

Gary Trent Jr. had 24 points, while Young chipped in with 13, and OG Anunoby finished with 11 for the Raptors, who played more than half the game without injured all-star guard Fred VanVleet.

Scottie Barnes, Toronto's newly minted NBA rookie of the year, finished with six points and 11 rebounds in his return after missing two games with a sprained left ankle.

James Harden had 22 points for Philly, while Embiid, playing with a thumb injury, finished with 21.

Siakam, who's taken some heat from fans for these playoffs, said he was determined to be more aggressive on Saturday.

“It's me having the ball and knowing that I have to make plays, and it's not just only scoring, it's everything,” Siakam said.

While the Raptors led by as many as 17 points on Wednesday before their heartbreaking overtime loss, Game 4 was a tight battle from the outset. The Raptors cobbled together a 12-point cushion in the second quarter, but the Sixers chipped away at the difference and the Raptors went into the fourth clutching to an 80-77 lead.

The Sixers cut the lead to a point, but the Raptors replied with a 6-0 run, and when Young swiped the ball off Embiid and Precious Achiuwa finished with a basket, the Raptors went up by seven with 9:11 to play.

The Sixers unravelled in the final few minutes, and when Achiuwa slashed through the defence for a left-handed basket with 1:28 to play, the Raptors went up by 14 to the delight of a rowdy Scotiabank Arena crowd that included singer Avril Lavigne.

Raptors coach Nick Nurse emptied his bench with 1:19 to play, as the crowd chanted “Raps in seven!”

No team in NBA history has come back from a 3-0 deficit to win a series, which Nurse called a “heckuva challenge,” saying “somebody's gotta do it.” Thirteen NBA teams have come back from 3-1 deficits to win series, including the Denver Nuggets, who did it twice in the 2020 playoffs.

There was definitely no love lost Saturday between Siakam and Embiid, who are both from Cameroon. Embiid was whistled for a technical after the bear hug. At one point, Siakam had fallen and had to raise a hand to block the seven-foot centre from stepping on him walking by.

“I'm a competitor. I love competing. This is the playoffs, the highest level,” Siakam said. “I'm cool with the talking, I just don't want those dirty plays. I don't like that. Keep it basketball. At the end of the day, it's all fake toughness.”

“To me, it felt like they had one job, coming in here tonight. And they got it done. So, congrats to them,” Embiid said.

When asked if he was suggesting the referees were trying to guarantee a Game 5, he said, “I don't know . . . but you can figure it out.”

Barnes, meanwhile, earned a loud standing ovation when team president Masai Ujiri presented his rookie of the year award before tipoff. Former Raptor great Vince Carter had delivered the news to the 20-year-old via video during a team practice.

“That's a big award, that's one of the biggies,” Nurse said. “I don't know how many people have it, less than 100, right? So it puts you in a pretty cool category.”

VanVleet's status for Game 5 is unknown; he's scheduled for further imaging on a left hip strain. He left the game late in the second quarter, limping badly down the court, then grabbing the neck of his jersey with two hands and ripping it down the front in frustration.

Embiid, who hit the game-winning three-pointer in Wednesday's 104-101 overtime win, played with a thumb injury that is feared to be a torn tendon. He repeatedly clutched the taped hand with a grimace on Saturday. He'll undergo an MRI shortly.

“It's painful. So, in basketball you need to use your hand a lot,” he said.

The series has felt like a war of attrition with the number of injuries.

“(Today) just felt like a game where everybody kept getting hurt,” Sixers coach Doc Rivers said, then joked: “Me and Nick are going to play one-on-one to end the game. I would like that. I'm all good with that one, even the way I move.”

After routs in Games 1 and 2, and Game 3's narrow loss, the Raptors got off to a solid start Saturday. Siakam led the way with 10 points in a see-saw first quarter that saw neither team lead by more than four points. The Raptors shot just 2-for-9 from three-point range yet did enough to head into the second tied with Philly at 24-24.

Trent Jr. had 12 points in the second and his running three-pointer with about four minutes left in the quarter capped a Raptors 26-11 run and saw them go up by 12. The Sixers closed with an 11-4 run, and the Raptors led 54-49 at the halftime break.

The series would come back to Toronto for Game 6, if necessary.

This report by The Canadian Press was first published April 23, 2022.