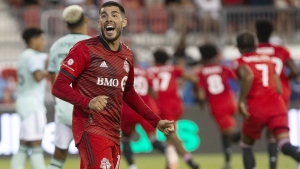 TORONTO - Spanish playmaker Alejandro Pozuelo, a former league MVP, is on the move as Toronto FC continues its teardown and rebuild.

A source, granted anonymity because the deal had not been announced, confirmed that the 30-year-old is headed to Inter Miami CF. The source said Toronto will receive assets in exchange - reportedly a modest amount of allocation money - but not a player.

Pozuelo, who won MLS MVP honours in 2020, is out of contract with Toronto this summer. At US$4.69 million this year, he is the fourth-highest paid player in MLS, according to numbers released in April by the MLS Players Association.

Pozuelo's departure opens up a designated player spot for Toronto, with speculation that the MLS club has Italian international Federico Bernardeschi, a winger/attacking midfielder, in its sights.

The 28-year-old Bernardeschi spent the last five season with Juventus, winning three Serie A titles, two Italian Cups and two Italian Super Cups. He is out of contract with the storied Italian club.

Toronto's other two DPs are Mexican defender Carlos Salcedo and Insigne. Salcedo has been sidelined by a family matter of late, with suggestions he may want to return to Mexico as a result.

While Pozuelo has been Toronto's most creative player, he struggled at times to find his role under new coach Bob Bradley, who wanted the Spaniard to attend to his defensive duties as well as the attack.

But Pozuelo seemed to have been given a more free-flowing offensive role in recent games, popping up all over the pitch as Bradley looked for a more fluid attack. Pozuelo has four goals in his last five games in all competitions.

Pozuelo marked his 100th Toronto appearance in all competitions on Saturday in a 2-0 loss to visiting Seattle.

Once again, Pozuelo was Toronto's best attacking threat. He led the team with 117 touches, completed 91.8 per cent of his passes and was handled roughly by Sounders tacklers on more than a few occasions.

Toronto acquired Pozuelo in March 2019 from Belgium's KRC Genk as a designated player. In four seasons with TFC, he has 26 goals and 31 assists in league play.

At his best, he was the straw that stirred the Toronto drink, with great vision on the field and the ability to unlock a defence with his passing. The Spaniard can also finish on his own.

Pozuelo won MLS MVP honours in 2020, helping Toronto to the second-best overall record in the league during the pandemic-shortened season. Pozuelo tied for the MLS lead in assists with 10, while finishing tied for eighth in goals with nine in 23 games. He led the league in combined goals and assists (19), chances created (70) and game-winning goals (5).

Pozuelo was the only Toronto player to start every match that season, ranking ninth in the league in minutes played (2,015 minutes), missing just 55 minutes of the regular season.

Injuries restricted him to 19 appearances in 2021 with one goal and four assists. Pozuelo, a father of three, also cited personal issues off the pitch for making last season a difficult one.

Pozuelo, who has four goals and five assists in 16 league outings this season, has said he wanted to remain to Toronto. Bradley. who doubles as the club's sporting director, has opted not to speak on Pozuelo's contract status.

Toronto, which finished second from last in the then 27-team league last season at 6-18-10, saw 20 first-team players move on in the off-season.

Bradley has used a lot of young talent in the first half of this season, with a mixed bag of results. There has been good and bad on the field, with the sense that he was waiting for the summer transfer window to inject more talent and experience.