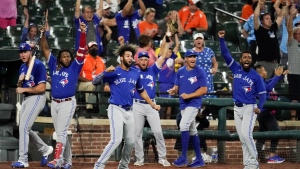 BALTIMORE (AP) -- George Springer hit a two-out, two-run homer in the seventh inning to give the Toronto Blue Jays an 11-10 victory over the Baltimore Orioles on Saturday in the first game of a doubleheader.

Vladimir Guerrero Jr. hit his 43rd home run of the season to move within one of the Angels' Shohei Ohtani for the major league lead.

Lourdes Gurriel Jr. and Danny Jansen also connected for the Blue Jays. They have played eight doubleheaders, one shy of their last six seasons combined and their most in a season since also playing eight in 1982.

After Orioles rookie closer Tyler Wells (2-2) allowed a double and walk in the seventh, Gurriel had an RBI single and Jake Lamb had a sacrifice fly to pull Toronto to 10-9. Wells managed to get two straight popouts before Springer hit an 0-1 pitch over the left-field fence.

Austin Hays hit a pair of homers for Baltimore and extended his career-high hitting streak to 17 games.

Anthony Santander connected for the second consecutive day and Ryan Mountcastle had a solo shot for the Orioles. They have homered 50 times at home since the All-Star Break, best in the majors.

Mountcastle has 27 home runs, the second-most by an Orioles rookie in a season behind Cal Ripken Jr., who had 28 in 1982.

Ryan McKenna had a two-run double in the fourth that extended the Orioles lead to 7-3 and ended the afternoon for Blue Jays starter off Hyun Jin Ryu, who allowed seven runs and eight hits over 2 1/3 innings -- his shortest outing since April 8, 2019.

Jansen pulled Toronto to 7-5 with a two-run homer in the fourth.

Hays and Mountcastle responded in the bottom half with back-to-back homers and Pedro Severino had an RBI single that extended the lead to 10-5 before the Blue Jays rallied.

Nate Pearson (1-1) picked up the win with two scoreless innings. Jordan Romano earned his 17th save.

Blue Jays: Gurriel was sore after colliding with Orioles reliever Fernando Abad when rounding third on Friday but he was able to stay in the lineup for the doubleheader.

Blue Jays: RHP Thomas Hatch (0-0, 7:36 ERA) was recalled as the 29th player and will start game two of the doubleheader.

Orioles: LHP Keegan Akin (2-8, 7.00) started the second game of the doubleheader. Akin has two victories and a no-decision in his last three starts and the Orioles have won all three games.