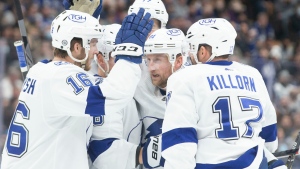 TORONTO - The Tampa Bay Lightning dug in against the Toronto Maple Leafs to grind out their fifth win in a row and give head coach Jon Cooper his 400th career victory on Thursday.

At 54, the Canadian Olympic coach from Prince George, B.C., became the 39th coach in NHL history-- and the quickest -- to reach the milestone after his short-handed team's impressive 5-3 win before 18,919 at Scotiabank Arena.

Cooper, who also has steered the Lightning to back-to-back Stanley Cups and 70 playoffs wins in his 10 seasons at the helm, reached 400 regular-season wins in his 659th game, passing Bruce Boudreau's 400 wins in 663 outings.

“I haven't had a lot of time to digest that other than the fact that obviously proud to have done it with one team,” Cooper said. “But you don't do that without an owner and, I've had two general managers 1/8 (Steve Yzerman and Julien BriseBois), who all have the same goal, all being on the same page, all bonded together.”

Captain Steven Stamkos led the way for the Lightning. He put his club in front 2-1 midway through the first period and then assisted on Tampa Bay's final three goals to extend his point streak to five games.

“It's definitely not easy, especially when you are losing that quality of players,” Stamkos said. “But you can't use that as an excuse. Guys stepped up.

“That's a really good team over there. I know they're missing a couple of key guys, too. They were playing good hockey.”

The Lightning exhibited their turnover-causing forecheck that sent Tampa Bay on a path to successive two Stanley Cups victories in and 2019-20 and 2020-21.

“Tough game for us,” said Kase, who scored his second of the game midway through the third period to pull his team within 4-3. “We made so many turnovers, so that's where I feel we lost the game.”

Tied 2-2 after the opening 20 minutes, Stamkos took away the puck from veteran Maple Leafs defenceman Jake Muzzin early in the second period. The Lightning captain then found Ondrej Palat, who was fortunate when Toronto right-wing William Nylander knocked the puck off Palat's stick and into his own goal.

Stamkos, raised just north of Toronto in Markham, and Palat were at it five minutes later, forcing Maple Leafs defenceman TJ Brodie into a turnover along the sideboards into the Toronto end.

Palat then found rookie Taylor Raddysh of nearby Caledon, Ont., for his third and a two-goal lead.

“You can't make those kinds of plays and spot them three goals at 5-on-5,” Maple Leafs coach Sheldon Keefe said. “We'll give them the power-play. The three 5-on-5 goals are inexcusable. Those are gifts against a team like that.”

The Maple Leafs took an early lead, only to fall behind 2-1 before scoring a second power-play goal in the late stages of the first period. Kase pounced on the loose puck in front of the Tampa goal for his 50th career goal and a 1-0 advantage.

Lightning veteran Corey Perry picked off a pass at his blue line from Muzzin and then set up linemate Pierre-Edouard Bellemare on a two-on-one break.

Tampa Bay moved in front 2-1 with Stamkos's 39-foot howitzer in the high slot midway through the opening period. But Nylander tied the game with a power-play goal at the 19:53 mark.

Auston Matthews made a nifty play from a face-off outside the Lightning blue line to gain the zone on his opponent Bellemare. Matthews then fired a cross-ice pass to Nylander for his 12th of the campaign.

This report by The Canadian Press was first published Dec. 9, 2021.