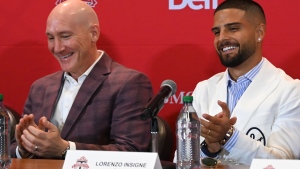 Toronto FC unveiled the new face of the franchise on Monday, with Italian star forward Lorenzo Insigne showing he has plenty of style off the pitch as well as on it.

Light glinted off several earrings with a chunky watch adorning his wrist during a news conference at BMO Field.

But the highest-paid player in Major League Soccer made it clear he did not leave his hometown club of Napoli for the money.

Insigne said while it was difficult leaving his Italian home, coming to Canada and signing with Toronto was a “life choice” for he and his family.

“I could have stayed in Europe. I'm 31 so I still have many years in front of me,” Insigne said through an interpreter. “But I wanted to choose the happiness and the well-being of my family ... I won a lot with Napoli and I lost as well. But I wanted a change. And more importantly a challenge - either in another European club or here in North America.

“I've heard people say soccer in North America is not real soccer. But I've seen it and it's not true.”

Calling himself a team player, he said several times that he looks forward to doing his talking on the field. “I can't wait actually to practise and be there for the team.”

Insigne's first game is expected to be July 9 - two days after the MLS secondary transfer window opens - at home against the San Jose Earthquakes.

Insigne was accompanied by wife Jenny and sons Carmine, aged nine, and Christian, seven, as well as other family members and his representation. Christian got the microphone for the final question of the session.

“Daddy, I love you,” he said in English.

The Insigne clan arrived Friday, greeting fans at a rally in Toronto's Little Italy. Monday was his official introduction with Insigne receiving his Toronto jersey with his trademark No. 24 (Canadian Jacob Shaffelburg switched to No. 22 to make No. 24 available for the Italian).

Insigne's move to Toronto on a four-year deal was announced Jan. 8 but his arrival was delayed until his existing contract with NapoIi expired at the end of the Italian season.

“He's got great style. He's got a great smile,” said Manning. “He's got personality. He's got that It factor. I remember the first time I met him, I felt it. You could see he's a star.”

“I think our fans are going to fall in love with him,” he added.

Insigne becomes the MLS's highest-paid player, vaulting past Chicago's Xherdan Shaqiri's US$8.15 million in 2022. For comparison's sake, Shaqiri's salary would rank 162nd in the NBA this season, according to HoopsHype.com, slotting in-between Cleveland's Cedi Osman and Oklahoma City's JaMychal Green.

Insigne, who turned 31 on June 4, is one of several stars joining MLS in the MLS transfer window opening July 7.

“We've had a number of very good players sign with this club but no one of his magnitude,” he added.

Toronto hopes Insigne's attacking flair and experience will help return a young, revamped TFC side up the standings. After making the MLS Cup final three out of four years from 2016 to 2019 - winning in 2017 - Toronto fell at the first playoff hurdle in the pandemic-disrupted 2020 season and finished 26th overall in 2021, one spot out of the league basement, at 6-18-10.

Under head coach Bob Bradley, TFC currently stands 11th in the East - and 23rd overall - at 5-8-3. Bradley can't wait to unveil his top gun, who is slated to start training with his new team by the end of the week.

“When the ball comes to his feet, the game comes to life,” said Bradley. “He's quick, he's dynamic, he's got a great eye for passes. When he gets around the goal, he's an excellent finisher.”

Insigne began his pro career with Napoli in 2009, making his Serie A debut at the age of 19 in January 2010. After loan spells with Cavese (Serie C), Foggia (Serie C) and Pescara (Serie B), he returned to Napoli.

Insigne scored 122 goals and added 95 assists for Napoli in 434 appearances in all competitions.

He received his first call-up to represent Italy in September 2012. In 2021, he helped Italy win the European Championship with a penalty shootout win over England. Insigne has 10 goals in 54 appearances with the Azzurri.

TFC is middle of the MLS pack on offence, tied for 13th in averaging 1.44 goals a game. But defence is another matter with the club ranking 27th in the 28-team league, conceding 1.88 goals a game on average. Only San Jose, at 2.13, concedes more goals.

More reinforcements are coming with veteran Italian defender Domenico Criscito expected to join from Genoa in the near future.

TFC has been thin at fullback all season. The departure of Brazil's Auro and Canadian Richie Laryea plus the retirement of Justin Morrow prompted Bradley to try young Canadians Luca Petrasso, Kosi Thompson, Jahkeele Marshall-Rutty and Shaffelburg at fullback.

Spanish playmaker Alejandro Pozuelo, like Giovinco a former MLS MVP, and Mexican centre back Carlos Salcedo are Toronto's other current DPs. Michael Bradley, son of the Toronto coach, still captains the team but is no longer on a designated player contract.

TFC has been preparing for Insigne. His home and family's schools, as well as English lessons, were organized in advance of his arrival.

Toronto, which has a reputation for looking after its players off the field, hired Paola de Cristofaro as manager of player care in March to help ease the Insigne family's transition to North America. De Cristofaro, an Italian-Canadian who spent 10 years in Rome and speaks fluent Italian, has been in touch with the family regularly.

This report by The Canadian Press was first published June 27, 2021