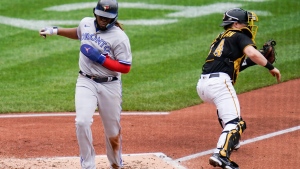 PITTSBURGH (AP) - Toronto Blue Jays interim manager John Schneider has plenty of things to worry about on a daily basis.

Closer Jordan Romano is not one of them.

So even as Romano put the tying and winning runs in scoring position with no outs in the ninth inning on Sunday against Pittsburgh, Schneider didn't consider issuing an intentional walk to load the bases.

Better to just let Romano do what he does as well as anyone in the major leagues at the moment: attack.

“He's a animal out there,” Schneider said. “I mean, he just can lock it in with the best of them.”

The proof came to life over the next three batters as Romano struck out Josh VanMeter, Tucupita Marcano and Kevin Newman to close out a 4-3 victory that completed a three-game sweep of the Pirates.

The win gives Toronto momentum for a pivotal series at Baltimore starting Monday.

“It's not a beauty pageant up here,” Romano said. “You've just got to get the job done.”

Romano's 30th save required more work than he would have liked. Jack Suwinski beat the shift by singling to left and Cal Mitchell followed with a sharp grounder that deflected off Romano's glove and rolled into left field. Pinch-runner Greg Allen promptly stole second and Romano appeared to be in trouble.

It turned out to be a mirage. VanMeter flailed at a 98 mph fastball. Marcano couldn't connect on an 88 mph changeup and when Newman failed to reach an 89 mph slider on the corner, the Blue Jays improved to 12-5 in their last 17, a push that's propelled them into the third spot in the tight American League wild-card race.

“Wins are hard to come by in the big leagues,” Schneider said. “So when you're feeling pretty good going into big series, it's a good thing.”

Teoscar Hernandez delivered the go-ahead RBI single in the seventh inning by lining a shot up the middle against Duane Underwood Jr. (1-5) and the bullpen did the rest as the Blue Jays improved to a season-best 14 games over .500 (73-59).

Alejandro Kirk also had two hits for Toronto. Cavan Biggio hit his fifth home of the season and second in five days for the Blue Jays.

Ross Stripling (7-4) allowed three runs on two hits with three walks and eight strikeouts in six innings. Toronto improved to 6-1 in Stripling's last seven starts dating to July 13 and bounced back from a bumpy home stand last week against the Los Angeles Angels and Chicago Cubs to pounce on the reeling Pirates, who are 11-34 in their last 45 games.

“(They were) all close games, but we found a way to win them all kind of different ways,” Stripling said. “So it gives you confidence for sure.”

Rookie shortstop Oneil Cruz hit his 12th home run for the Pirates, a lined shot to the bullpen beyond the centerfield wall with one out in the fifth that tied the game at 3. VanMeter added a two-run double for Pittsburgh, but the Pirates mustered little else and nothing when it mattered in the ninth.

“We've got to find a way to make contact,” Pirates manager Derek Shelton said. “I understand the execution of pitches by Romano and he's really good, but we've got to give ourselves a chance and we didn't.”

Underwood, who took the loss on Saturday night after giving up a bases-clearing triple to Bo Bichette, struggled for a second straight appearance. Danny Jansen and Matt Chapman singled to start the seventh.

Underwood caught a break when Vlad Guerrero Jr. grounded into a double play but Hernandez followed with a clean single up the middle to put Toronto in front. Only a spectacular diving catch by Suwinski on a sinking liner to the gap in left-center by Bichette prevented the Blue Jays from breaking it open.

The Pirates claimed former Houston reliever Peter Solomon off waivers. Solomon, a rookie went 1-0 with a 1.29 ERA in six appearances with the Astros before being designated for assignment on Sept. 1.

Blue Jays: Take a 2 1/2 game lead over Baltimore heading into a four-game set that starts with a doubleheader on Monday. The series is the first of three meetings between the AL East rivals over the final month of the season.

Correction : This story has been updated from a previous version that incorrectly stated Alejandro Kirk's first name.