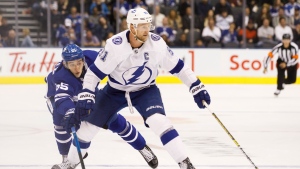 TORONTO - Steven Stamkos was in a much better mood after the Tampa Bay Lightning's latest effort.

An 11-point night from the top line and a renewed commitment to team structure will do that.

Nikita Kucherov scored twice and added two assists, Brayden Point buried a pair goals and set up another in his season debut, and the Lightning thumped the Toronto Maple Leafs 7-3 on Thursday.

The teams combined for seven goals and 27 shots in a wild opening 20 minutes, but the Lightning took charge from there, winning more 50-50 battles and shutting the door against the sloppy Leafs.

“After that crazy first period we really settled down and we defended really well,” Stamkos said. “If we can play like we did tonight, you can see what happened.”

The Lightning captain was left fuming after the reigning Presidents' Trophy winners were outshot 44-13 in Carolina on Sunday. That effort, or lack thereof, prompted Stamkos to call out his team for its “free-wheeling” approach - one he said played a part in the 62-win club getting swept by Columbus in the first round of the playoffs last spring.

“We can shut really elite teams down by skating and competing,” Stamkos said. “Those are the two things we talked about.

“It was a great response.”

Ondrej Palat also scored for the visitors, while Anthony Cirelli chipped in with three assists. Andrei Vasilevskiy made 25 saves as the Lightning halted a two-game slide.

Auston Matthews, with a goal and an assist, John Tavares and Andreas Johnsson replied for Toronto (2-2-1).

The Leafs came in also having dropped two straight, including Monday's solid effort in a 3-2 home loss to the Stanley Cup champion St. Louis Blues, but took a big step backwards.

“We just didn't execute at a very high level,” Tavares said. “That kind of effort isn't going to win us many hockey games.”

Frederik Andersen allowed seven goals on 28 shots before getting the hook in favour of Michael Hutchinson in the third period. Hutchinson finished with five saves.

Tampa's top line of Point, Stamkos and Kucherov - which didn't play together much last season, but combined for 318 points - made a strong case to remain intact.

With the Lightning up 4-3 after the first, Point - who missed a big chunk of training camp before signing a three-year, US$20.25-million contract as a restricted free agent and then sat out the Lightning's first three games following hip surgery - scored his second goal of the game on one of the visitors' dizzying displays of puck movement.

Stamkos left a pass for Kucherov, who saw his quick shot deflected home by Point at 10:46 of the second.

“You're playing with two superstar players,” Point said of his reintegration into the lineup. “They make the game easy.”

“It's game-changing speed,” Stamkos said. “It's up there with Connor McDavid in terms of, when it he gets it at a standstill, it's a couple of crossovers and he's gone.

“It just creates so much space.”

Tampa put things out of reach at 3:58 of the third when Palat's centring pass glanced in off Leafs winger Kasperi Kapanen.

Kucherov added his second of the night and third overall at 6:57 after stepping out of the penalty box when Andersen gave the puck away to Stamkos, who fed his linemate down low to make it 7-3.

“We've just got to get back to playing our way,” said Andersen, who was pulled in favour of Hutchinson after Tampa's seventh. “We're going to flush this one.”

The Lightning, who tied an NHL record with those 62 wins last season, got off to a fast start in that roller-coaster opening period.

Point got things started at 2:28 on his second shift of the season when he pounced on a rebound.

“You never know until you're there,” Point said of how he felt heading into the game. “It was good to get my feet under me.”

Toronto responded at 4:19 when Johnsson beat Vasilevskiy on a power play, and the home side went up 2-1 at 7:46 when Tavares tipped his first past the Tampa goalie.

But the Lightning responded on a man advantage of their own when Kucherov took a quick pass from Victor Hedman, who was playing his 700th NHL game, and wired a one-timer at 11:24.

Bought out by the New York Rangers and signed by Tampa for one year at $1.75 million, Shattenkirk made it 3-2 just 1:21 later when the defenceman slipped a backhand home for his third.

Matthews replied with his sixth with just over two minutes left in the period when he cleaned up a rebound in front of Vasilevskiy to tie it, but Stamkos restored Tampa's lead with 42.7 seconds remaining when he snapped his third past Andersen on another power play for a 4-3 lead to round out a wacky opening 20 minutes.

“That's just not good enough,” said Tavares, whose team visits the Detroit Red Wings on Saturday. “We have to be a lot better, execute much more consistently and understand what's going to bring us success.”