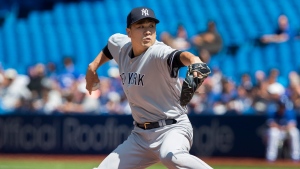 The Blue Jays (49-71) scored 19 runs in the first three games of the series at the Rogers Centre, including 13 in back-to-back wins over the mighty Yankees (77-41) on Friday and Saturday.

Tanaka (8-6) blanked the Blue Jays with four strikeouts and never allowed a runner to reach second base in his 94-pitch (66 for strikes), eight-plus innings. He left game after surrendering a lead-off single to left from Brandon Drury.

Closer Aroldis Champman finished the game for the Yankees. He got pinch-hitter Vladimir Guerrero Jr. to hit into a double play on the 13th pitch of his at-bat. One of Guerrero's foul balls hit off the facing of the fifth deck, 20 feet left of the left-field foul pole.

Toronto shortstop Bo Bichette drove a single into left field for his second hit of the game, but Chapman stuck out Cavan Biggio to end the game.

Blue Jays starter Trent Thornton (4-8) was perfect through four innings. He retired the first 12 batters he faced, striking out six, getting three Yankees to fly out and three more on ground-ball outs.

The powerful Yankees lineup finally touched Thornton for a run in the fifth inning. Toronto centre fielder Teoscar Hernandez misread a fly ball from Gio Urshela that dropped in front of Hernandez for a double. Urshela scored on Brett Gardner's ground-rule double to right field.

Thornton loaded the bases in the sixth after a one-out walk to leadoff hitter D.J. LeMahieu, an infield hit from Aaron Judge and Gary Sanchez getting hit in the left arm.

But Thornton escaped the jam with a hard hit grounder to first baseman Justin Smoak, who fired home to get LeMahieu. Smoak then nabbed catcher Reese McGuire's return throw at first for a critical double play.

Sam Gaviglio relieved Thornton to begin the seventh inning. The Blue Jays starter threw 89 pitches in his effort, 53 for strikes, and yielded only three hits. Gaviglio gave up two hits in his three innings.

But the Blue Jays failed to get to Tanaka. The Yankees starter had struggled in recent outings. He surrendered 24 runs in his previous four starts and 18 ? innings of work.

He was sharp against Toronto, however. He only allowed four runners to reach first base. Bichette led off the game with an infield hit after Urshela bobbled Bichette's slow chopper. Smoak reached base on an error from Yankees second baseman LeMahieu in the second inning.

Smoak also drilled a single to leadoff the eighth inning, but he was forced out at second on a ground ball from Hernandez to LeMahieu. Tanaka then coaxed Derek Fisher into hitting into a double play to end the inning and his day.

Notes - Reliever Jason Adam, who picked up his first Major League win in the Blue Jays come-from-behind 5-4 victory on Saturday, was optioned to triple-A Buffalo on Sunday to make room for newcomer Neil Ramirez â€¦ The 30-year-old Ramirez signed a minor-league deal with the Blue Jays last Tuesday after being released by the Cleveland Indians on Aug. 2.