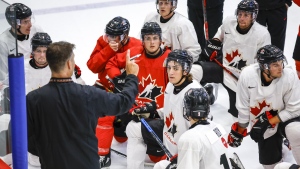 Pressure is always high for Canada at the world junior hockey championships.

But this year's team faces a whole host of unusual circumstances.

Not only will the squad be playing summer hockey on home soil when they begin tournament play against Latvia in Edmonton on Wednesday, they'll be doing so under unique scrutiny.

The allegations prompted parliamentary inquiries and the federal government has frozen its funding of the organization.

Big-name sponsors — including Telus and Canadian Tire — followed suit, leaving the ice at Rogers Place free of ads and the surrounding boards devoid of the usual logos as play gets underway Tuesday with Slovakia taking on Czechia. Later in the day, Finland will face Latvia and Germany will battle the reigning champion Americans.

The buzz and excitement that surrounded the initial 2022 tournament in Edmonton and Red Deer, Alta., is largely absent.

That iteration of the tournament was called off on Dec. 29 after just four days as rising COVID-19 cases among players and officials forced games to be forfeited.

The world juniors are a showcase of the best under-20 players across the globe, but the International Ice Hockey Federation has allowed athletes born in 2002 who have already turned 20 to play in this summer's championship.

Despite the rejigged eligibility, several big Canadian talents are missing from the tournament, including former captain Kaiden Guhle (a Montreal Canadiens prospect) and defenceman Owen Power, who the Buffalo Sabres selected first overall in the 2021 NHL entry draft.

Team Canada will be headlined by Regina Pats forward Connor Bedard, and Mason McTavish and Kent Johnson, who were part of the Olympic men's team that finished sixth at the Beijing Games.

The delayed 2022 tournament is also missing a big competitive threat, with the International Ice Hockey Federation barring Russia from the 10-team competition over the country's ongoing invasion of Ukraine.

Unlike previous iterations of the tournament, tickets for the 2022 world juniors are still readily available through Ticketmaster, including about 1,300 for Wednesday's tilt between Canada and Latvia. More than 1,500 seats for the final game of the 11-day tournament are still up grabs, too.