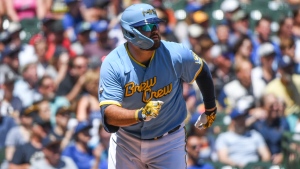 Milwaukee took two of three in the series between teams meeting for the first time since 2017.

Tellez, traded from Toronto to the Brewers last July, homered in the first inning. He then connected in the second for his 13th home run.

Milwaukee scored five times in the second. Tyrone Taylor led off with a double, Jace Peterson then reached on a perfectly executed drag bunt and Jonathan Davis had an infield single that brought in a run.

After Christian Yelich had an RBI grounder, Tellez homered again off Jose Berrios (5-4), driving a pitch over the right-field wall. The drive gave the Brewers an 8-3 lead as a crowd of more than 35,000 stood and chanted Tellez's name.

Tellez has two multi-homer games this season and seven in his career.

Alejandro Kirk hit a three-run homer in the Toronto first. After Tellez homered in the bottom half, a run-scoring double by Omar Narvaez later in the inning pulled Milwaukee even.

Gonzalez, making his second start for the Brewers, gave up four hits and three runs in four innings.

Berrios allowed eight hits and a season-high eight runs in 2 2/3 innings. He surrendered six runs over four innings in his previous start on June 20 against the Chicago White Sox.

Blue Jays: OF George Springer returned to the starting lineup after missing three consecutive games with right elbow discomfort. â€¦ Kirk started behind the plate after serving as DH on Saturday. Kirk got his hand got clipped by the backswing of Davis, forcing him to leave Friday night's game.

Brewers: Placed OF Hunter Renfroe on the 10-day injured list with a left calf strain and recalled INF/OF Pablo Reyes from Triple-A Nashville. â€¦ 2B Kolten Wong, who has been on the IL with a calf injury, played the second game of rehab assignment with Class A Wisconsin on Sunday and homered in his first at-bat.

Blue Jays: RHP Kevin Gausman (5-6, 3.19 ERA) will start as Toronto returns to Canada to host the Red Sox on Monday to begin an eight-game homestand. Gausman is 5-8 with a 4.01 ERA in 22 career appearances (17 starts) against Boston.

Brewers: After a day off on Monday, Milwaukee is on the road to take on the Tampa Bay Rays. RHP Brandon Woodruff (5-3, 4.74) will start on Tuesday for the first time since May 27 at St. Louis. Woodruff has been on the 15-day injured list with a right ankle sprain and Raynaud's syndrome, which affected the fingers on this throwing hand.