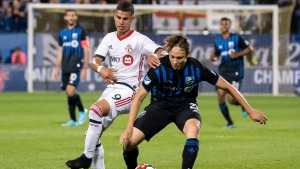 Montreal Impact Lassi Lappalainen (21) controls the ball way from Toronto FC Erickson Gallardo (9) during first half of the first leg of the Canadian Championship Final action in Montreal on Wednesday, September 18, 2019. THE CANADIAN PRESS/Paul Chiasson

Toronto FC has some unfinished business in the CONCACAF Champions League after coming just short of a title last year and making an early departure this season.

A victory over Montreal in the Canadian Championship final on Wednesday at BMO Field will ensure a repeat appearance in the 2020 tournament.

“We went from almost winning it to going out early,” Toronto FC coach Greg Vanney said Tuesday. “I think we like the opportunity of trying to get back into the tournament, maybe with a little bit more of a stable team ready to go.

“But for us, first and foremost, we want to be the Canadian champions. We want to try to win a trophy. This is an important event for us.”

The Impact took the opening leg 1-0 at home last week on a goal by captain Ignacio Piatti. Montreal can win the home-and-away aggregate series with a win, tie, or - if the Impact score - a one-goal loss.

“We set up with the mindset that this is going to be a dogfight,” Vanney said. “We're going to have to find our way through a very stingy defence to create opportunities.”

Toronto FC lost to Mexico's Chivas Guadalajara on penalty kicks in the 2018 CONCACAF Champions League final. The Reds crashed out in the round of 16 earlier this year to Panama's Club Atletico Independiente.

The Impact were in control for most of last week's opening leg with Toronto FC stars Alejandro Pozuelo and Jozy Altidore coming on as substitutes in the second half. Expect the home side to field a deeper starting lineup for the rematch.

Montreal midfielder Saphir Taider will miss the return leg due to card accumulation. Forward Maxi Urruti and midfielder Bojan Krkic are questionable due to injuries.

Impact coach Wilmer Cabrera said his team will be pressing for a valuable away goal.

“I never sit back in my life because it's not my personality,” he told reporters in Montreal. “So I cannot sit back because if I sit back, I feel that I'm not myself. Obviously with the team, I believe that we can play and we need to respect our opponent.

“That doesn't mean that we're not going to be defending correctly. But in this sport, the most important (thing) is to score one more goal than the opponent. In order for us to score more than the opponent, we need to find ways to attack.”

Both teams are coming off weekend road trips to Los Angeles in Major League Soccer play.

TFC booked a playoff spot with a 1-1 draw against LAFC while the Impact's slim post-season chances took another hit with a 2-1 loss to the Galaxy.

Toronto is sixth in the Eastern Conference standings with 46 points. The Impact are four points behind the seventh-place New England Revolution, who have a three-point edge on Chicago for the final playoff spot.

“We feel good about where we are,” Vanney said. “We're really focusing on the performances and now we've got to make sure we get the results.”

“I just think we're excited for it,” said Impact defender Daniel Lovitz. “Given the trend that we've had lately unfortunately in MLS, I think it should invigorate the group a little bit more to have this as something that we can accomplish to hang our hat on this year.”

After a bye through the qualifying round, Toronto FC reached the championship with a semifinal win over the United Soccer League's Ottawa Fury FC. Montreal beat York9 FC, a Canadian Premier League club based in Toronto, before topping the CPL's Cavalry FC of Calgary in the semifinal.

Warm, windy conditions are in the forecast for Wednesday evening at the lakefront stadium.

“The fans don't like each other,” said TFC midfielder and Toronto native Richie Laryea. “The teams get heated when they play against each other. It's a battle of two cities that want to be better than each other. So I'm sure tomorrow will be that and so much more.”

The Canadian Championship was first played in 2008. This year marks the first time that 13 teams have played from across five leagues.

The champion will join Mexico's UANL, Cruz Azul, Leon and Club America in the 2020 CONCACAF Champions League, which begins in February. Other qualified teams include Jamaica's Portmore United and MLS sides Atlanta United and LAFC.