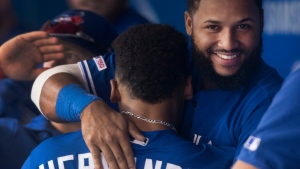 Toronto Blue Jays' Teoscar Hernandez gets a hug from teammate Richard Urena after he hit a home run against the Tampa Bay Rays in their American League MLB baseball game in Toronto Saturday September 28, 2019. THE CANADIAN PRESS/Fred Thornhill

TORONTO - Rookie right-hander Trent Thornton allowed one hit over five innings and Teoscar Hernandez homered to help lift the Toronto Blue Jays to a 4-1 win over the playoff-bound Tampa Bay Rays on Saturday.

The day after the Rays (96-65) clinched an American League wild-card berth in the series opener against Toronto, the 25-year-old Thornton (6-9) fanned eight Tampa Bay batters, walked four and held the Rays to only a second-inning single to left field from Matt Duffy.

Thornton looked to be struggling early in his 103-pitch outing, walking Tommy Pham and Brandon Lowe with two out in the first and needing 36 pitches to get out of the inning.

Thornton settled down after Duffy's one-out single that squeezed past third baseman Brandon Drury in the second inning. Drury was in the lineup after rookie Vladimir Guerrero Jr. was a late scratch with right knee soreness.

Thornton retired 11 of the next 13 batters with two more walks issued. His eight strikeouts increased his season total to 149, tops among AL rookies.

The University of North Carolina product made his team-leading 29th start for Toronto (66-95).

Rays starter Ryan Yarbrough (11-6) could not shake his first-inning follies as the first four Blue Jays checked in with hits. Hernandez greeted Yarbrough with a homer to straightaway centre field for his 25th of the season and fourth in his 13-game on-base streak.

Rookie Cavan Biggio extended his on-base streak to 28 games, a team-high this season, with a single to left field. He scored on Randal Grichuk's triple down the right-field line. Grichuk was knocked in by Rowdy Tellez, who singled to right.

Yarbrough, a lefty, also lasted five innings. But he hasn't won since picking up his 11th victory on Aug. 11 against the Seattle Mariners.

The Rays scored their only run in the seventh inning on Duffy's homer to left off Toronto reliever Sam Gaviglio.

The Blue Jays added a run in their half of the inning. Catcher Danny Jansen squeezed a single up the middle and was knocked in by Richard Urena's double to left centre.

The Blue Jays conclude their season with the series finale against Tampa Bay on Sunday in what could be Justin Smoak's final game for Toronto. The Rays will meet the Oakland A's in the AL wild-card game on Wednesday.

This report by The Canadian Press was first published Sept. 28, 2019.