Tkachuk, Senators down Maple Leafs 5-3 in 1st game in 10 months 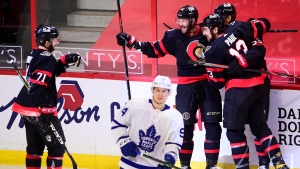 But he made it clear the Ottawa Senators - only just emerging from the darkest days of their rebuild - won't be an easy out in 2021.

And the rest of North Division should probably take notice after Friday.

Tkachuk had a goal and two assists, Matt Murray made 20 saves in his Ottawa debut, and the Senators defeated the Toronto Maple Leafs 5-3 in their first game in more than 10 months.

“That's going to be the way we play,” said Tkachuk, an alternate captain at 21 years of age. “We have a couple other levels to get to.”

Thomas Chabot, Austin Watson, Derek Stepan and Chris Tierney also scored for Ottawa. Josh Norris, with his first NHL points, Drake Batherson and Nikita Zaitsev added two assists each in the first of nine meetings between the Ontario rivals in a pandemic-shortened season.

John Tavares, with a goal and an assist, Zach Hyman and Alexander Kerfoot replied for the Leafs. Frederik Andersen stopped 19 shots for Toronto, which will look to rebound when the teams play the rematch Saturday back inside an empty Canadian Tire Centre because of COVID-19 restrictions.

“With the way the schedule's set up, you gotta have a short-term memory,” Stepan said. “We got a good win, but we've got to put our work boots back on.”

The Leafs, widely viewed as Stanley Cup contenders and the betting favourite to win the division, have now given up nine goals through six periods to start the schedule.

“We were just playing a little bit too loose,” said Toronto centre Auston Matthews, whose team led 1-0 and 2-1 before Ottawa exploded with four straight goals. “That's a team that works hard. They're not going to go away. That's on all of us.

“We've got to make sure we put our foot on the gas and (have) no mercy.”

Friday's tilt marked the Senators' first game in 310 days after they unknowingly took part in the final contest of the 2019-20 regular season March 11 in Los Angeles against the Kings. The league suspended its schedule the following day because of the widening coronavirus pandemic, and 30th-ranked Ottawa wasn't included in the 24-team summer restart.

Playing their first home date since March 5 - a stretch of 316 days - the Senators unveiled an off-season roster remake that includes No. 3 overall pick Tim Stutzle, who celebrated both his NHL debut and 19th birthday, Murray, defencemen Erik Gudbranson, Josh Brown and Braydon Coburn, as well as Stepan, Watson, Evgenii Dadonov and Cedric Paquette up front.

The Leafs, Senators and Canada's other five NHL franchises have been grouped together in the one-time-only North Division for the abbreviated 56-game 2020-21 campaign to avoid cross-border travel into the U.S.

Given where the franchise stands in the genesis of its rebuild, the Senators aren't expected to challenge for one of the division's four post-season spots, but showed what's possible when they compete at a high-level and play with structure.

“The team did a heck of a job keeping them to the outside,” Murray said. “I really liked our effort all the way up and down.”

Picked third in October's NHL draft, Stutzle is the most-hyped prospect in the nation's capital since Ottawa drafted Jason Spezza - now in the twilight of his career with the Leafs - second overall back in 2001. Nicknamed “Jimmy” by roommates Tkachuk and Norris, the German forward finished with just over 12 minutes of ice time and one shot.

“Jimmy played well,” Tkachuk said. “He looked really good. Great speed. You can just clearly tell he's going to be a stud - not only on our team, but throughout the whole league.

Tied 1-1 after 20 minutes, the Leafs went ahead at 9:15 of the second when Kerfoot fired a shot through traffic past Murray, who was playing his first game with Ottawa after an off-season trade with the Pittsburgh Penguins.

But the Senators got back even 1:13 later when Tkachuk outmuscled T.J. Brodie to deflect Zaitsev's effort. Watson then got in on the action at 12:32, ripping a shot in off the crossbar to give Ottawa its first lead.

Tierney then made it 4-2 at 15:03 when he swatted at a loose puck that glanced in off Brodie as the Leafs, who beat the Montreal Canadiens 5-4 in overtime Wednesday in their opener, were once again soft in front of Andersen.

Brodie's miserable night continued when he gave the puck away behind the Toronto net to Stepan in the third. Batherson's stick broke on his shot, but the puck dribbled to Stepan, who swept Ottawa's 5-2 goal past Andersen at 6:15.

The Leafs got a power play not long after that, and Tavares snapped his second of the season in off the post just 52 seconds later for Toronto's second power-play goal of the night and fourth already in 2021, but the visitors were unable to get any closer.

Leafs head coach Sheldon Keefe lamented his team's inability to press after Kerfoot's goal made it 2-1.

“We lost three or four shifts in a row coming off of that goal,” he said. “If we're a team that wants to accomplish anything, the game should be over from there. We should be able to take care of the lead and then build on the lead.

“We showed that we're not there yet.”

Toronto opened the scoring at 9:59 of the first when Hyman batted a puck out of midair on a man advantage after Murray made the initial save as the Leafs dominated for long stretches in the opening stages.

But wearing rebranded black jerseys featuring a return to the two-dimensional centurion logo used by the franchise from 1992 through 2007, the Senators equalized on a 5-on-3 man advantage when Chabot blasted a one-timer with 43.5 seconds left in the period.

“We battled to stay in the game,” Ottawa head coach D.J. Smith said. “We had a real tough time breaking out early. They had us hemmed in, but we did a pretty good job letting the goalie see the puck.

“We got some timely goals and we found a way to finish it off.”