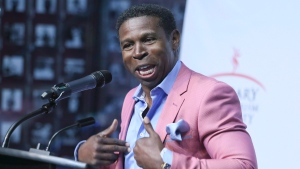 TORONTO - He has been a player, head coach and front-office executive. Michael (Pinball) Clemons can now add the title of general manager to his Toronto Argonauts resume.

Clemons was named Argos GM on Tuesday. He replaces Jim Popp, who's in the final year of his contract and will remain as a consultant until season's end.

The move comes just three days after Toronto's embarrassing 55-8 road loss to the B.C. Lions. That not only dropped the Argos' record to a CFL-worst 2-12 but eliminated them from playoff contention for a second straight season.

It's also the second year in a row Toronto has made a major change to its football operations. Head coach Marc Trestman was fired hours after the Argos lost their regular-season finale in Ottawa last year to finish 4-14. The team won the Grey Cup in 2017.

Argos president Bill Manning enlisted Clemons' help last month as an adviser. Clemons has been the team's vice chair since 2009.

“It's difficult to be here having gone through a coaching change and now general manager change because I'm a big believer in consistency,” Manning said. “The goal was for Michael to help the team but at 2-12 and going into 2020, it was unacceptable not to be in the playoffs two years in a row.

“To me, I couldn't think of a better person to lead this franchise going forward with the winning pedigree that he has . . . than Pinball Clemons.”

“I didn't need a job, I have a wonderful (charitable) foundation I love,” he said. “I make a living talking to people, I talk and they pay me.

Clemons said one of the biggest changes Toronto must make is conceptual.

“Our goal here is to build bridges not fences,” he said. “We're looking to build a culture first.

“We're trying to really begin to understand who we are again. I'm an old guy now . . . this is my 31st season and so hopefully we can let guys know who we are and begin to build that brand again.”

And he repeatedly preached patience.

“We need to build a championship team and that doesn't happen overnight,” he said. “When I was first asked to be a coach, I was playing one week and the very next week I was the head coach of the team.

“A very difficult situation . . . and that whole process took about four years. Don't know exactly how it will go and I can't design that but that's part of the fun.”

John Murphy, who has been working with Toronto in a consulting capacity, is now the club's vice-president of player personnel and Clemons' right-hand man. Murphy has previous CFL front-office experience with the Calgary Stampeders and Saskatchewan Roughriders.

“I know what winning franchises look like and we weren't looking like a winning franchise.(Clemons) has four Grey Cups (three as a player, one as a coach), John has two (with Calgary) and we need that leadership. In many ways, folks, 2020 starts today.”

Clemons wouldn't discuss potential roster or coaching changes. Corey Chamblin is in his first season as head coach - and under contract for two more years - but was Toronto's defensive co-ordinator in the 2017 Grey Cup season.

Chamblin has won just two of his past 21 games as a CFL head coach - he was fired after an 0-9 start with Saskatchewan in 2015. Chamblin did lead the Roughriders to a Grey Cup win as head coach in 2013.

“The public assessment is not something solid ballclubs do,” Clemons said. “We don't ever want to fall into that territory.

“As far as assessing goes, it's our duty to look at everything.”

Like when he became head coach in 2000, Clemons has no previous experience as a GM. But he only had one losing season in eight on the sidelines, compiling a 67-54-1 regular-season record and leading Toronto to the '04 Grey Cup title.

Clemons will tackle his new job like he did coaching - by surrounding himself with experienced people.

“My greatest strength is to understand how important I am not and I mean that sincerely,” he said. “If it's me, this can't be done.

Clemons faces a huge challenge revamping Toronto's lineup. The Argos' offence is ranked second-last in offensive points (17.8 per game) and net yards (336.4 per game) while the defence stands last overall in points (32.9 per game) and offensive yards (433.2 per game) allowed.

“In (the past six) six Grey Cup championships here, our quarterbacks have been Matt Dunigan, Doug Flutie, Damon Allen and Ricky Ray,” said Clemons, who played with the first two and coached the third. “We have to build a strong team . . . but ultimately we can't disguise the importance of that position.”

The CFL's trade deadline is Wednesday, and playoff contenders could be looking to make a deal with the Argos to add QB depth. Clemons said Murphy will be handling deadline trade talks.

Ray led Toronto to its '17 title before suffering a career-ending neck injury in the club's 2018 home opener. The Argos haven't found any consistency under centre since.

That's also what plagued Popp late during his tenure in Montreal. The franchise struggled to find Anthony Calvillo's successor after the Hall of Fame quarterback suffered a career-ending concussion in 2013.

Popp was fired as Als GM in November 2016 after 21 seasons - and three Grey Cups wins in eight appearances - with the franchise. Toronto was 15-35 under Popp.

Toronto has also struggled at the turnstiles this season, standing last in CFL attendance and drawing under 10,000 spectators for a game last month. The Argos' move to BMO Field from Rogers Centre in 2016 hasn't resolved their attendance woes.

Neither has an ownership change to Maple Leaf Sports & Entertainment, which bought the Argos in December 2017. MLSE also owns the Maple Leafs, Raptors, Toronto FC and other sports and entertainment properties.

Manning, also Toronto FC's president, has been the Argos' top executive the past two seasons.

This report by The Canadian Press was first published Oct. 8, 2019