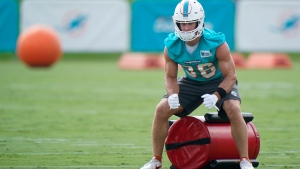 Holley, 26, was the CFL's top rookie in 2019 after registering 78 tackles, 22 special-teams tackles, one sack and an interception with the Calgary Stampeders.

The six-foot-one, 210-pound Holley signed with the Miami Dolphins in 2020, recording three tackles in three games.

He was among Miami's final cuts this summer.

This report by The Canadian Press was first published Nov. 3, 2021.