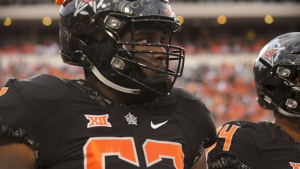 TORONTO -- The shock of being the first player taken in the CFL Canadian college draft isn't going to wear off anytime soon for Shane Richards.

The Toronto Argonauts kicked off the draft by selecting the towering six-foot-eight, 334-pound Oklahoma State offensive lineman first overall Thursday night. And the Calgary native, who signed a two-year deal plus an option, figures that won't officially set in until the first day of training camp.

"It's just an unreal feeling right now," Richards said during a conference call. "I don't think it's fully hit me yet.

"I don't think it's going to until I strap up and I'm walking out to the first practice and I can sit there and say, 'OK, I'm finally here. It's time to get this work done."'

Richards attended the CFL combine in March but was sent home after deciding against testing. Despite that, he was regarded by many league officials as one of the draft's most pro-ready prospects.

"Coaches watch tape more than they watch numbers so I kind of relied on my tape being up to par," Richards said. "They see that I've yet to hit my ceiling so that was my mindset going into the combine and doing that."

Veteran Chris Van Zeyl, a 35-year-old native of Fonthill, Ont., enters his 14th season with Toronto at right tackle. The selection of Richards does allow the Argos the opportunity to go with five Canadians on the offensive line as the club finished 2018 with American Isiah Cage at left tackle.

Richards said his plan is to go to camp and compete and let the coaches determine if that's good enough to secure a starting spot.

"I'm going to go into camp being as prepared as possible," he said. "Also, I'm going to compete.

"At camp . . .if they trust me to be their guy on the starting line that's what I'm going to do. I still have a lot to learn."

It's the first time since '97 that the Argos held the first overall pick in the CFL draft. That year, they took centre Chad Folk, who was a member of two Grey Cup-winning teams from 1997-08.

The Tiger-Cats followed by taking Hamilton native Jesse Gibbon, a four-year starting offensive lineman at Waterloo. The six-foot-five, 300-pound Gibbon was ranked No. 14 on the CFL scouting bureau's top-20 draft prospects list and is expected to play guard or centre in the pro ranks.

"Well, I'm kind of in awe," Gibbon said. "Tim Hortons Field is only 20 minutes from my house so I'm super excited.

"I'm just going to show up to camp with a positive mentality and try to make the most out of being the second overall pick. There's a lot of pressure but I don't think I'm going to treat it any different than if I was going out for practice back at Waterloo."

And like Richards, Gibbon will let the matter of starting as a rookie up to Ticats coaches.

"If that's what they want me to do it's something I will do," he said. "I'd like to start if I could but it's up to the coaches at the end of the day."

At No. 3, the Edmonton Eskimos took a flyer on the six-foot-three, 254-pound Betts. The 24-year-old Montreal native is the only player to win the J.P. Metras Trophy as Canadian university football's top lineman three straight years (2016-18) and was named U Sports' top rookie in 2015. He also won two national titles with Laval.

The Bombers followed up by taking Tennessee defensive lineman Jonathan Kongbo. The six-foot-five, 254-pound native of Surrey, B.C., started 17-of-30 games with the Vols, seeing action as a linebacker and defensive lineman. However, Kongbo suffered a major knee injury -- tearing both the ACL and MCL -- in a game last October versus Auburn, ending his senior campaign.

At No. 6, the Saskatchewan Roughriders selected the top receiver in the draft, Justin McInnis of Arkansas State. The six-foot-four, 212-pound native of Pierrefonds, Que., has great size and speed (4.57-second 40-yard dash time). McInnis, who's scheduled to attend rookie mini-camps with the Indianapolis Colts and Tennessee Titans, had 115 receptions for 1,577 yards and 10 TDs over his college career.

The Ottawa Redblacks, true to form, then picked Kansas offensive lineman Alex Fontana. The six-foot-four, 298-pound Toronto native stated nine games at centre last season after missing the '17 campaign with the University of Houston due to a foot injury. Fontana was accepted an NFL rookie mini-camp invitation from the Kansas City Chiefs.

The Grey Cup-champion Calgary Stampeders completed the opening round by taking UConn receiver Hergy Mayala, a Montreal native. The six-foot-one, 208-pound Mayala had 40 catches for 361 yards and five TDs last season and over his four-year tenure recorded 113 receptions for 1,352 yards and 12 touchdowns in 43 games.

Neither the B.C. Lions nor Montreal Alouettes had first-round picks. The Als did have three second-round selections, though, and selected St. Francis receiver Kaion Julien-Grant with the fifth pick (No. 13 overall), Missouri defensive lineman Nathan Anderson at No. 16 and six-foot-six, 330-pound Laval offensive lineman Samuel Thomassin to end the round.

Toronto opened the second round by selecting Laurier defensive lineman Robert Smith at No. 9. The six-foot-two, 245-pound Brampton, Ont., native had 66.5 tackles, 18.5 sacks and 24.5 tackles for a loss over his college career and was invited to the Buffalo Bills and New York Giants rookie mini-camps.

Hamilton addressed a big need with its two second-round selections, taking receivers Nikola Kalinic of York and Idaho's David Ungerer with the 10th and 11th picks, respectively. Last year, the Ticats selected receiver Mark Chapman No. 1 however he signed with the defunct American Alliance of Football but never suited up. Chapman hasn't indicated if he wants to play in Canada.

Toronto made an interesting pick to open the third round, taking University of British Columbia quarterback Michael O'Connor at No. 20. This off-season, the Argos signed QB Brandon Bridge, of Mississauga, Ont.

The six-foot-five, 235-pound O'Connor, from Ottawa, began his collegiate career at Penn State before heading to UBC and leading the Thunderbirds to a Vanier Cup title in 2015. O'Connor completed 222-of-316 passes (70.3 per cent) for 2,701 yards with 14 touchdowns and just four interceptions last season and has accepted a rookie mini-camp invitation from the Seattle Seahawks.