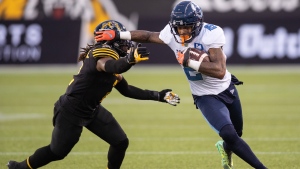 HAMILTON, New Zealand - It goes down as just a win but it means much, much more than that to head coach Ryan Dinwiddie and the Toronto Argonauts.

Boris Bede's 51-yard field goal on the final play of the game capped a wild fourth quarter and earned Toronto a stirring 24-23 road win over arch-rival Hamilton on Monday. Not only did it give the Argos (6-3) a 2-1 lead in the head-to-head series but moved them four points ahead of the Tiger-Cats (4-5) and Montreal Alouettes (4-4) atop the East Division standings.

The fourth and final Toronto-Hamilton meeting will be Nov. 12 at BMO Field.

The win was the Argos' third straight and fourth in five games. But they were able to rally from a 12-point, fourth-quarter deficit despite having played five days earlier, a 35-16 home win over the Ottawa Redblacks.

“I really thought it kind of defined us as a team a little bit,” Dinwiddie said. “I think we're starting to believe in each other and hopefully this was a statement win, one we can look back on at the end of the year.

“Coming off five days I knew it was going to be tough. I'm sure everybody wrote us off . . . those guys played team football today. They played for each other, they fought for each other and kept motivating each other.”

However, Toronto looked every bit like a team playing on a short turnaround in the first half. Hamilton led 12-0 at one point in the second quarter and finished the half holding the ball for a whopping 19 minutes 54 seconds and amassing 234 yards - compared to 95 for Toronto.

Yet Hamilton only led 12-5 at intermission.

But after completing 7-of-15 passes for 84 yards in the first half, Bethel-Thompson caught fire in the second. He finished the contest completing 29-of-42 passes for 388 yards with two TDs against one interception.

“I believe in Mac, he was doing well and he was leading us,” Dinwiddie said. “I tried to get the run game going, we didn't and so I said, 'Screw it, we're throwing the football.' We've got to win throwing.

“I challenged the guys at halftime. I said, 'Where are my playmakers? We've got to start making some plays.' And they did.”

Bethel-Thompson credited Toronto's defence for keeping the game close until the offence got on track.

“When you have such a good defence like that, you always have a shot,” he said. “We never felt we were out of it, we just had to do our job.

“We just stopped taking dumb penalties, we stopped getting in our way. We just got into a rhythm and we can do that all the time. We just have to do our job.”

“For some reason, it seems like we like close games,” Daniels said. “Just being able to pull one out in this fashion I think is big for the team.

“It doesn't matter what the outside noise is or what territory we're in, everyone battles for each other. I think today was a good stepping stone in the right direction.”

Bethel-Thompson hit Chandler Worthy on a nine-yard TD strike at 6:40 to cut Hamilton's lead to 20-15.

Hamilton (4-5) suffered its second straight home loss, to the dismay of a Tim Hortons Field gathering 21,378. The Ticats were coming off a 23-20 overtime defeat to Montreal on Oct. 2 that halted an 11-game win streak there.

“It's not always about overall stats,” said Hamilton head coach Orlondo Steinauer. “It's something about timing in the game.

“We did not get some big plays.”

Masoli's 45-yard pass to Jaelon Acklin at 2:07 of the fourth put Hamilton ahead 20-8. It came after Bede's 27-yard field goal just 15 seconds into the quarter that pulled Toronto to within 13-8.

But a big reason why Toronto had to settle for the field goal was Jumal Rolle's stellar defensive play to prevent Argos' receiver Chandler Worthy from making a TD grab in the end zone.

Bethel-Thompson opened the second half with five straight completions for 70 yards in driving Toronto from its 10-yard line to the Hamilton 36 but Bede's 43-yard field goal try was wide, preserving Hamilton's seven-point lead. Joel Whitford made it 13-5 with a 62-yard punt single at 11:47.

Bede's 40-yard field goal cut Hamilton's halftime lead to 12-5 at halftime. Toronto's other points came on a safety at 8:47 of the second.

Sean Thomas Erlington had Hamilton's other touchdown. Bertolet had a convert and three field goals.

Bede finished with three field goals and a convert. The other Toronto points came on a safety.