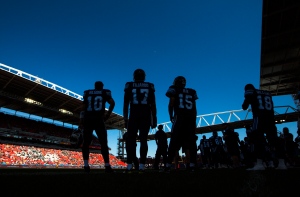 Players stand on the sidelines as the Toronto Argonauts play the Hamilton Tiger-Cats at BMO Field in Toronto on Saturday, June 11, 2016. (The Canadian Press/Mark Blinch)

The six-foot, 225-pound running back was excited at the prospect of playing for the Toronto Argonauts after being selected in the fifth round, No. 42 overall, by the club in this year's CFL draft. But that was before the novel coronavirus forced the league to cancel its 2020 campaign.

“It (being drafted) was one of the best days of my life I have to say,” the former Waterloo Warriors running back said Wednesday during a telephone interview. “I stayed positive but to find out there'd be no season was really tough, especially with it being my rookie year and I was trying to prove something.

“It's been like a year since I last played and this is the first time in 10 years that I've had the fall off from football. It feels really weird because it becomes part of your life. and you kind of get used to it, but there's next year right?”

But nothing could prepare Pellerin for the myriad of emotions he'd experience while the league and CFL Players' Association met to determine whether to stage a 2020 season.

“One week you'd hear everything was going really well and it looked like the season was going to happen,” he said. “Then the next week it would completely flip upside down.

“And then the week after that there'd be something to give you a bit more hope. It was definitely a roller-coaster of emotions.”

But no football allowed Pellerin to return to B.C. and see family and friends over Thanksgiving. He's also been able to remain at Waterloo and focus solely on completing his studies in geography and environmental management rather than trying to juggle playing in the CFL with academics.

“The only good thing to kind of come out of this is being able to finish my education this year more easily,” he said. “And I was able to get some of my mom's cooking for a few days, which was very nice.

“It had been a while since I last got back home.”

Pellerin has continued his off-season workouts and is also playing in a seven-on-seven league in Waterloo.

“It's something to at least be a part of football in all of this,” he said. “It brings you up a bit when you're missing football.”

Being drafted by the Argos has allowed Pellerin to remain in Waterloo and maintain the relationships he's established there. A sister recently relocated to Toronto and his girlfriend's family lives in nearby Milton, Ont.

Getting the call from Toronto has also moved Pellerin that much closer to realizing his boyhood dream of playing in the CFL. He fondly remembers attending B.C. Lions games as a youth and that his late father David - a Regina native who passed away when Pellerin was 16 - was a big Saskatchewan Roughriders supporter.

“I'm someone who sets goals in my life and that (playing in CFL) was one of them,” he said.

Pellerin understands the jump from U Sports to the CFL is a significant one.

“The speed of the game is a lot quicker and will be an adjustment,” he said. “You can tell that even by watching it on TV.

“I feel like I'll be able to learn the offence. I've had good coaches at university who've prepared me for that.”

For most rookies, the first opportunity at the pro level comes on special teams. Pellerin said he's definitely willing to prove he's more than capable of contributing on all special teams.

“That's something I really want to focus on,” he said. “I just want to show my coaches I can play specials and deserve to be on every special team we have because that's one-third of the Canadian game.”

Pellerin is also hoping to show his versatility in Toronto's offence as both a running back and fullback.

“Obviously I like running the ball, you'd be crazy if you didn't,” Pellerin said. “But I've always loved blocking, it's something I've always taken tremendous pride in.

“Making a block that protects the quarterback and allows him to throw for a touchdown, you still feel a level of achievement, at least I do. I feel fullback is a position I'll be able to play at the next level and so it's something I'm preparing myself for.”