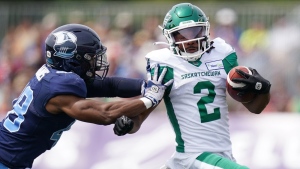 WOLFVILLE, N.S. - Wynton McManis returned an interception 50 yards for a touchdown to rally the Toronto Argonauts to a 30-24 win over the Saskatchewan Roughriders in an entertaining but often chippy Touchdown Atlantic game Saturday afternoon.

McManis stepped in front of a Cody Fajardo pass and ran untouched to the endzone at 12:54 of the fourth quarter. Moments later, McLeod Bethel-Thompson found Brandon Banks for the two-point convert to put Toronto ahead 30-24.

Toronto (2-2) halted an eight-game losing streak versus Saskatchewan (4-2) before an enthusiastic Raymond Field gathering of 10,886. This marked the first-ever CFL regular-season game played in Nova Scotia.

Saskatchewan made it interesting as Fajardo's 32-yard TD pass to Duke Williams at 6:01 tied the score 21-21. Then at 10:19, Brett Lauther's 31-yard field goal gave Saskatchewan a three-point advantage.

The fireworks began during the pre-game warmup when Williams and Richardson squared off. A video showed Williams picking up Richardson's helmet and throwing it at him before the two players were separated.

There were no penalties announced once the game began, and both Williams and Richardson were on the field with their respective units.

Just prior to two flyovers by a Canadian Armed Forced helicopter -- during the national anthem, then prior to kickoff -- the Riders scratched defensive end AC Leonard. That was significant as the CFL's top-ranked defence was already minus starting defensive linemen Pete Robertson (foot) and Garrett Marino (suspended).

Harris came into the game needing 46 yards to move past Stegall (15,209). In the third quarter, Harris took a pass in the backfield from Bethel-Thompson, headed upfield and then hurdled a Saskatchewan defender for an 18-yard gain.

That gave Harris 57 net offensive yards from the scrimmage at that point.

Toronto's Boris Bede opened the second half with a 42-yard field goal at 7:02 of the third. It capped a 12-play drive to open the second half but came after Bethel-Thompson had to recover an errant snap to effectively end a promising march.

Jamal Morrow had Saskatchewan's other touchdown. Lauther, of Truro, N.S., had three field goals, two converts and a single.

Saturday's game was the sixth in the Touchdown Atlantic series but first since 2019. Halifax hosted Toronto and the Hamilton Tiger-Cats in an '05 exhibition game that ended tied 16-16.

Seating capacity at Raymond Stadium was increased from about 3,000 to over 10,000. And the contest certainly had a college feel to it.

The afternoon start in brilliant sunshine, and music blaring from speakers located in one endzone created an upbeat, festive atmosphere. The turf field attracted plenty of heat but, mercifully, a persistent breeze provided timely relief.

Some fans arrived three hours before kickoff to sit on the temporary sets and watch players on both teams getting a feel for the turf and their surroundings. Others walked on the track surrounding the field and lean on fences to get a closer look at the pre-game warmups.

Given the close proximity of the fences to team benches, some spectators were able to call out to nearby players and chat briefly with them. An accommodating Fajardo posed for photos with fans before trotting on to the field for pre-game warmup.

Rider Nation was well represented given the abundance of green scattered throughout Raymond Stadium, not surprising as Saskatchewan fans have always travelled well in support of their team. And CFL commissioner Randy Ambrosie could be seen walking around the facility, pressing the flesh and casually speaking with people.

Atlantic Canada has long been mentioned as a potential landing spot for a CFL expansion franchise. Halifax received a conditional team in the 1980s but it never became operational.

Before the 2018 Grey Cup game in Edmonton, the CFL revealed tentative plans to add a 10th team in Halifax. Originally, the hope was to have the Atlantic Schooners on the field by 2021 in Moncton while a new stadium was being built in the Nova Scotia capital.

The ownership group had secured $20 million in government funding to build a facility before the COVID-19 pandemic resulted. But Schooner Sports and Entertainment hasn't been involved in any CFL events this week, reportedly because expansion into Halifax isn't imminent.

Bede's 12-yard field goal capped an entertaining second quarter and staked Toronto to its 17-14-half-time lead. It came after Fajardo pulled Saskatchewan even with a 13-yard TD pass to Morrow at 13:59, a drive kept alive by a pass interference call on Richardson following a third-down incompletion.

Bethel-Thompson's 40-yard TD pass to Phillips at 12:35 put Toronto ahead 14-7. Bethel Thompson found Daniels on a seven-yard scoring pass just 38 seconds into the second but Lauther pulled Saskatchewan even with a 30-yard field goal at 4:42.

Toronto and Saskatchewan won't have to wait long to see each other again. The Argos are in Regina next weekend.