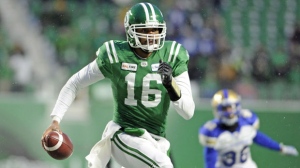 Bridge joins the Argos after playing eight games for Saskatchewan last season, throwing for 804 yards and a touchdown.

The six-foot-five, 235-pound QB was selected in the fourth round of the 2015 CFL Draft by Montreal getting in two games as a rookie for the Alouettes.

Bridge signed with the Roughriders in 2016 and a year later became the first Canadian QB to throw for at least three touchdowns in a game in over 30 years when he led Saskatchewan to a road win in Hamilton.

In 25 career CFL games, Bridge has thrown for 2,485 yards and 13 touchdowns while adding 321 yards and four touchdowns on the ground.