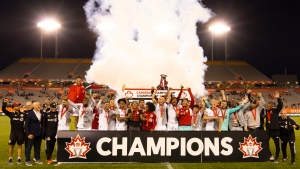 Both teams played to a 1-1 result through 90 minutes in front of 13,715 fans in Hamilton. TFC won the game 5-4 on penalties when Forge defender Kwasi Poku hit the crossbar on his team's final attempt during sudden death.

Forge FC was the first Canadian Premier League team to take part in the final of a Canadian Championship. They had pushed the pace of play for much of the match and battled with the Major League Soccer club until the end.

Alejandro Pozeulo opened the scoring in the 57th minute for Toronto FC after his shot from inside the box sailed just past the hand of Forge FC goalkeeper Triston Henry.

The Hammers didn't waste any time in finding an equalizer.

Tristan Borges took a pass from Aboubacar Sissoko while inside the box and beat TFC keeper Quentin Westberg in the top right corner in the 60th minute to tie the match 1-1.

Forge FC nearly took the lead in the 70th minute when Terran Campbell's breakaway was stopped by Westberg.

Jordan Perruzza had one of Toronto FC's best chances late in the second half. His header from the centre of the box was saved by Henry in the 80th minute.

Both teams traded chances in the dying minutes as both teams loosened from their tight formations, which led to more end-to-end play.

Forge FC started the match strong and had multiple chances to break the game open. Midfielder David Choinere had several scoring chances on Toronto FC and drew a foul in the penalty area when Toronto FC defender Luca Petrasso shoved him down in the 20th minute. Borges, who took the penalty awarded to Forge, hit the crossbar on the ensuing opportunity.

Borges also had a free kick opportunity in the seventh minute and his shot was heading to the left side of the goal before Westberg got there in time to punch the ball out of harm's way.

Toronto FC's best scoring chance in the opening half came in the 26th minute. Lukas MacNaughton's header from the centre of the box was saved by Henry.

The Hammers led in shots on target 4-2 over Toronto in the first half.

The COVID-19 pandemic forced changes to the 2020 edition of the tournament. On Aug. 13, 2020, the Canadian Soccer Association announced revisions to the championship to involve a final between one Canadian Premier League team and one Canadian Major League Soccer club.

A proposed makeup date in early 2021 was contested by Forge FC owner Bob Young, who posted an open letter on his Twitter account on March 6, 2021, stating his team was at a disadvantage due to local pandemic restrictions at the time worked for the opposing club but not for his squad.

Two days later, Toronto FC announced that the club suspended training due to multiple members of the team testing positive for COVID-19 and the game was postponed to 2022.

It was the first time both clubs have played in a professional competition against each other.

This report by The Canadian Press was first published June 4, 2022