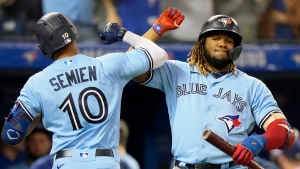 TORONTO - In a matter of minutes, the final day of the Blue Jays' dramatic 91-win season went from cloud nine to crashing down to earth.

The Blue Jays returned to their clubhouse in a jubilant mood after putting the final touches on a 12-4 victory to sweep the lowly Baltimore Orioles in the regular-season-ending three-game series on Sunday.

But as they glanced up at the various television sets, they saw the bad news playing out. The Boston Red Sox had just gone up 7-5 in Washington against the Nationals.

“You don't ever want your fate in the hands of somebody else,” said Blue Jays outfielder George Springer, who hit a pair of homers, including a grand slam in the third inning to put his team in front 9-1. “But that's just the way it was, is, hoping for the best, but it didn't happen.”

The Blue Jays (91-71) needed a win and a loss from either the Red Sox or New York Yankees to make it to an American League wild-card tiebreaker game on Monday.

The Yankees (92-70) won 1-0 in the bottom of the ninth of their home game against the AL East division-winning Tampa Bay Rays. The Red Sox (92-70) were behind 5-1 after five innings in their game but stormed back to win on Rafael Devers' two-run homer in the final inning.

Hundreds of the 29,942 at the Rogers Centre stayed around to watch the final inning of the Red Sox game on the giant scoreboard in centre field.

There was a chance of a four-way tie, but the Seattle Mariners (90-72) dropped their season finale at home 7-3 to the Los Angeles Angels.

The Yankees will face the Red Sox in the AL wild-card game at Fenway Park on Tuesday. The Blue Jays' chances were hurt when they dropped two of three games at home to the Yankees to begin the season's final week.

Blue Jays manager Charlie Montoyo reasoned that playing their home games in Dunedin, Fla. and Buffalo in the first four months was the difference. Toronto went 25-11 at home since its Rogers Centre return in late July and 22-9 overall in September and October to lead the AL during that stretch.

Montoyo believes the playoff push will only help his young team improve.

“They gained a lot through these games,” Montoyo said. “They were must-win games.”

Montoyo held a season-ending meeting with his players after the team photo was snapped, a few hours before the final series began on Friday. He told the group how proud he was of their season.

Vladimir Guerrero Jr. drilled a two-run shot in the second inning for his AL-leading 48th long ball. The blast set a record for homers in a season for a player 22 years or younger, passing the previous record of 47 set by Eddie Mathews in 1953.

“It's sad, but we just have to move on,” said Guerrero after the way the day ended.

“I think this will make us a stronger team, a better team next year.”

Guerrero won the AL batting title with a .311 average and the league's homer crown. He fished second on the team with 111 RBI, five behind Teoscar Hernandez, who knocked in Guerrero and Bichette in the fourth inning.

Marcus Semien hit the Blue Jays' fourth and final homer in the finale, giving him 45 on the season. Guerrero and Semien became the sixth pair of teammates in Major League Baseball history to each hit 45 or more homers in a season, and the first since David Ortiz and Manny Ramirez did it with the Red Sox in 2005.

Semien and starter Robbie Ray are two Toronto players eligible for free agency in the off-season.

The 31-year-old Semien is open to re-signing with the Blue Jays.

“We had the best offence in the major leagues, and in my mind, the best starting pitching in the game. Who doesn't want to be a part of that?

“There's little pieces to add to get to the next level. I'm one of them. I think our bullpen is another one. We also have young, young guys getting better.

“We'll see what happens, but I had a great time here.”

This report by The Canadian Press was first published Oct. 3, 2021.