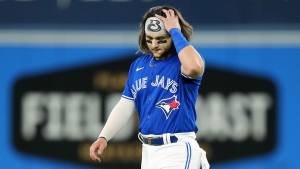 Toronto Blue Jays shortstop Bo Bichette (11) reacts as he walks back to the dugout after grounding out to end the fifth inning of American League wild card MLB postseason baseball action against the Seattle Mariners in Toronto on Friday, October 7, 2022. THE CANADIAN PRESS/Nathan Denette

The way Seattle starter Luis Castillo was pitching, there was no room for error.

The Mariners hushed a boisterous sellout crowd at Rogers Centre with a three-run first inning en route to a 4-0 victory in the opener of the best-of-three wild-card series.

Seattle refused to let Toronto get back in the game and now the Blue Jays are a loss away from post-season elimination.

Cal Raleigh hit a two-run homer in the first inning after Eugenio Suarez drove in leadoff hitter Julio Rodriguez with an RBI double. Seattle added an insurance run in the fifth.

Castillo rolled through 7 1/3 frames, giving up six singles and striking out five without issuing a walk.

“We managed our hits and at-bats were decent and (we) couldn't get the big hit when we got guys on base,” said Blue Jays manager John Schneider. “His stuff was good. You have to give him credit.”

George Springer and Matt Chapman had two hits apiece for Toronto. The Blue Jays put two runners on base in the third inning and did it again in the fifth but couldn't bring a run home.

“Those are big spots,” Schneider said. “When you're facing a pitcher like that, when you get traffic on the bases, you want to come through with a big hit.

“It's tough to do against a guy like that and really tough with two outs. So you just take that for what it is today and you move on.”

Schneider later confirmed that Kevin Gausman would get the start in Game 2 on Saturday. The Mariners will counter with Robbie Ray.

“We're used to playing must-win games,” Chapman said. “I think today a lot of people had their first playoff game and learned a lot from the game, got to experience it.”

If Game 3 is necessary, it will be played Sunday afternoon at Rogers Centre.

“This is what we grind all year for - to have home-field advantage,” Manoah said. “It's two out of three so we'll be back tomorrow.”

An announced crowd of 47,402 was in full voice at the start of Toronto's first home playoff game since 2016. Edwin Encarnacion, who hit a walk off homer in the play-in game that year, threw the ceremonial first pitch.

Manoah was dominant at times through the regular season but appeared to battle some jitters in the late-afternoon start. Castillo, meanwhile, cruised through the bottom half of the first inning by retiring the side on groundouts.

The Mariners have some pop at the top of their lineup with Rodriguez - a virtual lock for the American League rookie of the year award - a key offensive anchor. But Seattle's main strength is on the mound with a solid rotation and a bullpen that led the AL in several pitching categories.

Castillo was pulled in the eighth inning after hitting Springer with a pitch in the left wrist area. Springer stayed in the game and X-rays taken after the game were negative, Schneider said.

Chapman provided Toronto's first extra-base hit with a two-out double in the ninth inning. Raimel Tapia grounded out to end it.

Blue Jays infielder Santiago Espinal, who missed the last two weeks with an oblique strain, was included on the team's 26-man roster for the series. Backup catcher Gabriel Moreno and reliever Yusei Kikuchi also made the cut.

Moreno gives Toronto three catchers and the flexibility to use Alejandro Kirk or Danny Jansen behind the plate or as a designated hitter if needed. Kirk started at catcher for Game 1 while Jansen batted eighth as the DH.

Kikuchi struggled as a starter this season but has improved of late in a bullpen role. He offers a power arm from the left side.

The Mariners have tabbed Logan Gilbert to start Game 3 if needed. The Blue Jays are expected to go with Ross Stripling but it is not official.

The series winner will advance to the AL Division Series starting Tuesday in Houston.

The Blue Jays missed the playoffs last year and were swept by the Tampa Bay Rays in a wild-card series in 2020. Toronto last reached the AL Championship Series in 2016 and last won the World Series in 1993.

It was the Mariners' first playoff game since losing the ALCS in 2001. The franchise entered Major League Baseball with the expansion Blue Jays in 1977.

Toronto Blue Jays shortstop Bo Bichette (11) reacts as he walks back to the dugout after grounding out to end the fifth inning of American League wild card MLB postseason baseball action against the Seattle Mariners in Toronto on Friday, October 7, 2022. THE CANADIAN PRESS/Nathan Denette