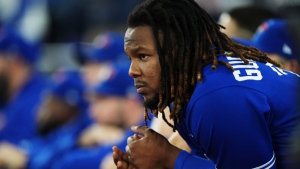 TORONTO - As far as gut-punch playoff losses go, this one hurt more than most for the Toronto Blue Jays.

With a seven-run lead and support from a boisterous sellout crowd, a Game 2 victory seemed like a virtual lock in their wild-card series against Seattle.

The Mariners had other plans. They completed an improbable comeback with a pair of four-run innings before taking the lead in the ninth for a stunning 10-9 win.

Instead of planning for a decisive Game 3 on Sunday at Rogers Centre, the Blue Jays were left to ruminate on a crushing defeat that ended their post-season.

Tim Mayza relieved starter Kevin Gausman in the sixth inning and gave up a three-run homer to Carlos Santana.

Springer was taken off the field on a golf cart while Bichette stayed in the game. Manager John Schneider said Springer was “doing OK” but didn't provide injury specifics.

Toronto was swept from the wild-card round for the second time in three years.

“It stinks now but it's only going to make us better and stronger,” said catcher Danny Jansen. “We're going to get to where we want to be.”

The Blue Jays won 92 games over the regular season and seemed to be peaking for the playoffs.

Toronto went 22-11 down the stretch to clinch the top wild-card seed and home-field advantage in the first round.

The Blue Jays could only tip their cap to hot starter Luis Castillo in a 4-0 shutout loss in Friday's Game 1. The Jays' bats came alive in Game 2, but the Mariners answered as the Toronto bullpen hiccupped.

Seattle became the third team in MLB history to come back from a seven-run deficit to win a post-season game. The Blue Jays could only attempt to find positive takeaways.

“We learned how to navigate a full season and how to play meaningful games in September and finish them out,” said Toronto third baseman Matt Chapman. “There's a lot of things that we can be proud of.

“I hope that we all use this as motivation to continue to get better.”

The Blue Jays were a pre-season favourite to go to the World Series. A middling first half cost Charlie Montoyo his job as manager and Schneider replaced him on an interim basis.

But more will be expected in 2023 and beyond for a team built to win now.

General manager Ross Atkins tinkered at the trade deadline but didn't push all in. The Mariners went big by giving up some top prospects to land Castillo from the Cincinnati Reds and the move paid off.

The Blue Jays have most of their core players under contract. Ross Stripling, who emerged as a reliable starter after Hyun-Jin Ryu's season-ending injury, is a notable free agent.

Atkins also has a decision to make on Schneider, who put his stamp on the team after his promotion from bench coach. He delivered strong results in the second half before coming up short on the playoff stage.

“My message going forward into the off-season is as much as it sucks right now, it will make that group better,” Schneider said.

Next up for Seattle is a best-of-five American League Division Series against the top-seeded Houston Astros starting Tuesday.

Since winning the ALDS in 2016, the Blue Jays have lost eight of nine playoff games.

This report by The Canadian Press was first published Oct. 9, 2022.