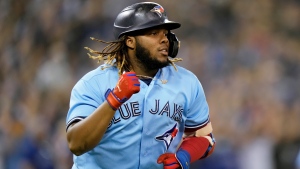 The BBWAA revealed finalists for AL and NL MVPs, Cy Young Awards, Rookies of the Year and Managers of the Year on Monday night. The winners - decided on ballots sent at the end of the regular season - will be revealed next week.

Toronto left-hander Robbie Ray was a finalist for the AL Cy Young Award along with the Yankees' Gerrit Cole and the White Sox's Lance Lynn. Ray was 13-7 with a 2.84 earned-run average and 248 strikeouts.

Ray and Semien are both coming off of one-year contracts. The Blue Jays extended qualifying offers to both players Sunday.

Max Scherzer is a finalist for a fourth Cy Young Award after splitting the season between the Nationals and Dodgers, but all the other finalists would be first-time winners. Milwaukee's Corbin Burnes and Philadelphia's Zack Wheeler are the other finalists in the NL.

Ex-St. Louis Cardinals skipper Mike Shildt was nominated for NL Manager of the Year less than a month after he was fired. The other finalists are Milwaukee's Craig Counsell and San Francisco's Gabe Kapler.

The Cardinals won 17 straight games down the stretch and made the postseason for the third time in four years under Shildt, but the 2018 Manager of the Year was cut loose because of what general manager John Mozeliak termed “philosophical differences.” Oliver Marmol was promoted from bench coach to replace Shildt.

The NL MVP race is down to Philadelphia's Bryce Harper, Washington's Juan Soto and San Diego's Fernando Tatis Jr. Harper is the only former MVP of that trio, earning the honor in 2015 with the Nationals.

Postseason star Randy Arozarena and teammate Wander Franco of the Tampa Bay Rays are finalists for AL Rookie of the Year along with Astros right-hander Luis Garcia. Franco appeared in just 70 games but still got attention after reaching base in 43 consecutive games, matching Frank Robinson's record from 1956 for longest by a player age 20 or younger.