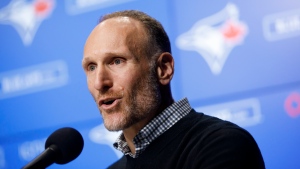 Toronto Blue Jays president Mark Shapiro is very proud of how his club did in 2021.

“Every team that is not the team that wins the last championship game played is bitter,” said Shapiro on Monday, hours before Game 3 of the American League Championship Series.

Toronto just missed on the post-season, winning six of its final 10 games, finishing one game back of the New York Yankees and Boston Red Sox in a thrilling finish to the American League's wild-card chase that included the Seattle Mariners and came down to the final game of the regular season.

“I'm going to remember this year for a long time, just because the team was so good and believe so strongly in the group of guys that we had,” said Shapiro. “But I do think yeah we need to continue to build, you know I'm encouraged by that improvement from 95 losses to 91 wins.”

Boston beat New York 3-1 in the American League's wild-card game, then beat the AL East champion Tampa Bay Rays three games to one in the best-of-five AL Division Series. The Red Sox are now playing the Houston Astros in the AL Championship Series with a World Series berth on the line.

Shapiro noted that Boston and New York's records were only one game better than Toronto's.

“I do feel like when I watch these teams play, not those two in particular but all of them, that if we had found a way to get in that we were going to be a team that would have been very tough in the post-season,” said Shapiro.

Toronto was 32-28 in a 2020 season shortened by the COVID-19 pandemic, and the Blue Jays front office elevated the team with a productive off-season.

Over US$185 million was added to the roster, highlighted by the acquisitions of outfielder George Springer, infielder Marcus Semien and starting pitcher Robbie Ray.

Springer struggled with injuries but finished the year with 22 home runs, 50 runs batted in and a .264 batting average.

Semien hit 45 homers - a new MLB record for a player who played most of his season at second base - with 102 RBIs and an MLB-leading 86 extra-base hits.

Ray also had a career season with a 2.84 earned-run average and 248 strikeouts over 193.1 innings pitched.

But both Semien and Ray were signed to one-year deals and Shapiro said the Blue Jays will have to spend again to remain competitive.

“We'll have the resources to do it, both in young talent that we could trade and in payroll,” said Shapiro. “It may not be the exact same shape and form, but we're going to get better. We'll find a way to do it.”

Shapiro was especially pleased with the mental toughness of the Blue Jays, who played the entire 2020 season in the United States, using the team's minor league stadium in Dunedin, Fla., and its triple-A affiliate's ballpark in Buffalo, N.Y. The Blue Jays again started the 2021 season in Florida and western New York, but finally got to return to Rogers Centre on July 30 when the Canadian government eased border restrictions.

“They took the attitude 'It is what it is but not what it should be and we just have to find a way to get better,”' said Shapiro. “I do think that we will build upon that perseverance, we'll build upon that resilience.

“That will be a trademark we'll have with this team moving forward, that we endured things that no one else had to endure.”

The Blue Jays completed their Player Development Complex in Dunedin last off-season, creating a larger training facility for players at all levels within the organization.

Shapiro said on Monday that with the impressive 65-acre complex squared away, his next major infrastructure project will be improving Rogers Centre, starting with a new scoreboard in 2022. In the long run, the team is going to consider major renovations to its ballpark in downtown Toronto or building a new stadium for the major league club.