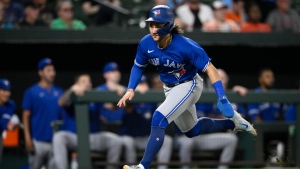 Toronto Blue Jays' Bo Bichette runs toward home to score on a single by Raimel Tapia during the eighth inning of a baseball game, Monday, Aug. 8, 2022, in Baltimore. The Orioles won 7-4. (AP Photo/Nick Wass)

BALTIMORE (AP) - Ramon Urias hit a three-run homer in the first inning, and Anthony Santander, Ryan Mountcastle and Austin Hays also went deep to lift the Baltimore Orioles to a 7-4 victory over the Toronto Blue Jays on Monday.

The Orioles, who entered the day two games behind Seattle and Tampa Bay for the final two wild cards in the American League, pulled within three of Toronto for the first wild card. This was the first of 15 meetings down the stretch between the Blue Jays and Orioles.

Baltimore starter Jordan Lyles (9-8) allowed a third-inning homer by Cavan Biggio, but the Orioles responded in their half of that inning with back-to-back solo shots by Santander and Mountcastle to make it 5-1.

Matt Chapman hit a solo homer for Toronto in the sixth, but Hays answered with one of his own in the bottom half.

The Blue Jays scored twice in the eighth, but Felix Bautista came on and retired Whit Merrifield on a two-out grounder with two on. Mountcastle's RBI single made it 7-4.

The first two Toronto batters of the ninth reached on an error and a single against Bautista. Then the big right-hander struck out Teoscar Hernandez and got Bo Bichette to bounce into a double play to secure his fifth save.

Vladimir Guerrero Jr. singled in the fifth to extend his hitting streak to 19 games, the longest in the AL this year. The Jays have won three of seven games on their nine-game road trip.

Baltimore has won six of seven.

Blue Jays: RHP Ross Stripling (hip) threw a bullpen session Sunday, and manager John Schneider said his next step is either live batting practice or a rehab start. ... Schneider said LHP Tim Mayza (shoulder) could be back with the team in three weeks.

Orioles: Hays (side) returned to the lineup after missing four games. ... Baltimore recalled RHP Louis Head from Triple-A Norfolk, and INF Rylan Bannon was claimed off waivers by the Los Angeles Dodgers.