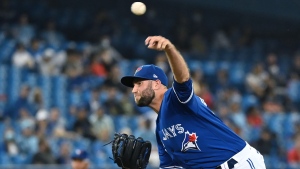 Toronto Blue Jays' Tim Mayza pitches in the eighth inning of an American League baseball game against the Tampa Bay Rays in Toronto on Tuesday, Sept. 14, 2021. THE CANADIAN PRESS/Jon Blacker

The Blue Jays entered play on an offensive tear with a whopping 52 runs scored over the stretch, including an 8-1 rout of the Rays in the series opener a night earlier at Rogers Centre.

But the bats finally cooled Tuesday night as starter Drew Rasmussen (3-1) threw five efficient innings ahead of a relief crew that allowed just one hit. Andrew Kittredge worked a 1-2-3 ninth for his seventh save.

It was Toronto's second loss in its last 14 games. Blue Jays starter Jose Berrios (11-8) was the hard-luck loser, giving up four hits and one earned run over seven innings.

Choi's 10th homer of the season -- a second-inning blast off the facing of the stadium's 200 level -- gave Tampa an early lead. Some nice Toronto defence prevented a second run from coming across in the frame.

With Randy Arozarena on third base with two out, shortstop Bo Bichette made a diving stab on a hard grounder and his quick release on the throw helped get Manuel Margot by a half-step.

Margot offered some defence of his own in the third inning with a diving catch in short centre field on Reese McGuire's sinking liner.

The Blue Jays threatened in the fourth after George Springer led off with a double and Marcus Semien walked. Rasmussen responded by getting Toronto's 3-4-5 hitters -- Vladimir Guerrero Jr., Bichette and Teoscar Hernandez -- in order.

Lowe provided an insurance run in the eighth inning with his 34th homer of the season. He turned on a first-pitch slider from southpaw reliever Tim Mayza.

Tampa Bay outhit Toronto 6-3 and neither team made an error. The rubber match in the three-game series is set for Wednesday afternoon.

Notes: Announced attendance was 13,103. ... The retractable roof was closed in the eighth inning. ... The game was completed in a tidy two hours 20 minutes. ... Shortstop Bo Bichette was named Toronto's nominee for the Roberto Clemente Award. ... Toronto left-hander Robbie Ray (11-5, 2.69 ERA) is scheduled to start the series finale against right-hander Michael Wacha (3-4, 5.37). ... The Blue Jays have an off-day Thursday before closing their six-game homestand with a weekend series against the Minnesota Twins.

This report by The Canadian Press was first published Sept. 14, 2021.