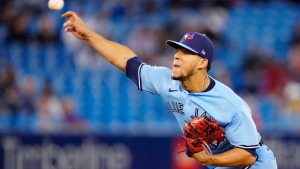 TORONTO - Jose Berrios made quite an impression on the Toronto Blue Jays after being acquired at the trade deadline last season.

The team plans to have him serve as one of the anchors of its rotation for years to come.

Berrios and the Blue Jays have agreed to a US$131-million, seven-year contract extension pending a physical, a team source confirmed to The Canadian Press on Tuesday. The source spoke on condition of anonymity because the deal has yet to be announced.

The right-hander, who was set to become a free agent after the 2022 season, was acquired in late July from the Minnesota Twins. Berrios was effective and reliable over 12 starts with Toronto, posting a 5-4 record and 3.58 earned-run average.

The extension provides some long-term stability for a rotation that could look significantly different next season.

Veteran left-handers Robbie Ray (13-7, 2.84) and Steven Matz (14-7, 3.82) are free agents, with Ray likely to sign a lucrative new deal after a campaign that has him a favourite to win the American League Cy Young Award on Wednesday night.

Whether Ray and second baseman Marcus Semien, also a marquee free agent, decide to re-sign in Toronto is a top off-season storyline for a franchise that barely missed the playoffs in 2021.

The Blue Jays recently extended qualifying offers to both players, which ensured Toronto would be eligible for draft-pick compensation if they signed elsewhere. Matz also increased his value with a bounceback '21 season but he did not receive a qualifying offer.

Toronto paid a steep price to land Berrios from the Twins, giving up a pair of highly touted prospects in shortstop Austin Martin and right-hander Simeon Woods Richardson.

A two-time all-star, Berrios was as advertised with the Blue Jays. A durable workhorse who regularly throws deep into games, he had 78 strikeouts and 13 walks over 12 games with Toronto and held opponents to a .238 average.

The Berrios deal sets him up to be a long-term showcase starter for a team that looks to be on the upswing in the American League East. Veteran left-hander Hyun Jin Ryu and young right-hander Alek Manoah are other key cogs in the rotation.

The extension is the second-richest deal in franchise history behind the $150-million, six-year contract signed by outfielder George Springer as a free agent last off-season.

Berrios made his big-league debut with the Twins in 2016. He has had a winning record and an ERA of 4.00 or less in every year since his rookie season.

Berrios, who had one year of arbitration eligibility remaining, earned $6.1 million last season.