Springer hits game-tying homer in ninth, Tapia has RBI in 10th as Jays rally for win 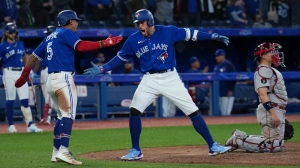 TORONTO - George Springer hit a two-run homer in the ninth inning and Raimel Tapia hit a game-winning sacrifice fly in the 10th to give the Toronto Blue Jays a wild 6-5 win over the Boston Red Sox on Tuesday night.

With Bo Bichette on second base to start the extra frame, the Blue Jays loaded the bases on an intentional walk to Vladimir Guerrero Jr., and a base on balls to Alejandro Kirk.

Matt Barnes (0-1) struck out Matt Chapman before Tapia lifted a fly ball to left field off Matt Strahm that brought home Bichette with the winning run.

Boston's Jake Diekman blew a save opportunity in the ninth as Toronto pulled even with a three-run frame. Tapia led off with a double and scored when Santiago Espinal followed with a double of his own.

Diekman fanned pinch-hitter Lourdes Gurriel Jr., and Bradley Zimmer before Springer turned on a 96-m.p.h. fastball for his fourth homer of the year.

The Red Sox had broken open a tight game with four runs in the eighth inning off Toronto reliever Yimi Garcia, who lasted just one-third of a frame. Trevor Story and Xander Bogaerts keyed the Boston attack with RBI doubles as Garcia allowed an earned run for the first time in nine appearances this season.

Toronto starter Kevin Gausman struck out nine over six strong innings for the Blue Jays. The right-hander allowed four hits and an unearned run, trimming his earned-run average to 2.19 from 2.89.

Boston starter Nick Pivetta, a Victoria native, retired the first six batters in order before issuing a leadoff walk to Espinal in the third inning.

Gosuke Katoh reached on a fielder's choice and Zimmer walked before trying a double-steal attempt. The Red Sox successfully challenged the safe call at second base and it likely saved them a run as Springer followed with a single to bring home Katoh.

Boston answered with an unearned run in the fourth after catcher Zack Collins threw well wide of second base on a Bogaerts steal attempt. Bogaerts took third on the play and scored on a sacrifice fly by Kike Hernandez.

Toronto regained the lead in the bottom half of the frame when Espinal drove in Guerrero from second base with a single.

Blue Jays slugger Teoscar Hernandez participated in batting practice as he continues to make progress after suffering a left oblique strain a couple weeks ago.

Blue Jays outfielder Lourdes Gurriel Jr., was not in the starting lineup after dealing with some hamstring tightness on Monday night.

He came on as a pinch-hitter in the ninth inning Tuesday but struck out. Gurriel stayed in the game at first base.

Entering Tuesday's games, the Blue Jays led the major leagues with 25 homers on the season.

Guerrero, who served as designated hitter on Tuesday, leads the team with five homers and 12 RBIs.

Right-handers are scheduled to square off Wednesday night. Toronto will send Ross Stripling (0-0, 4.50 ERA) to the mound against Boston's Michael Wacha (1-0, 1.88).

This report by The Canadian Press was first published April 26, 2022.