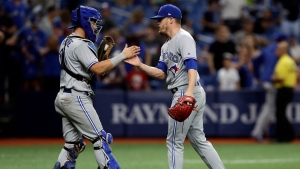 Stewart (1-0), claimed off waivers from the Los Angeles Dodgers on July 31, followed opener Wilmer Font, who gave up one hit over 2 1/3 innings.

After Tim Mayza allowed Avisail Garcia's RBI single before getting the final out in the eighth, Ken Giles gave up Mike Zunino's two-run homer in the ninth before finishing for his 15th save.

Lourdes Gurriel Jr., Randal Grichuk and Derek Fisher homered for the Blue Jays, who were winless in the last 10 series (0-9-1) against Tampa Bay before taking two of three at Tropicana Field. Toronto went 7-3 on a 10-game road trip.

Gurriel put the Blue Jays up 1-0 on a fourth-inning homer. Since returning from Triple-A Buffalo May 24, he has homered 19 times in 65 games.

Grichuk made it 2-0 on his 19th homer off McKay leading off the sixth.

Justin Smoak singled to end McKay's day after a career-high 93 pitches and scored on Fisher's two-run drive off Colin Poche.

Toronto is among the major league leaders home runs since June 16 with 91.

Rays manager Kevin Cash didn't rule completely it out but indicated that the two-way McKay won't be used as a hitter except when pitching in NL parks due to rotation injuries. AL Cy Young Award winner Blake Snell (left elbow), Tyler Glasnow (right forearm) and Yonny Chirinos (finger) are all out until at least September. McKay is lined up to start next week at San Diego.

Blue Jays: Manager Charlie Montoyo said LHP Ryan Borucki (left elbow inflammation) was being examined Wednesday by Dr. James Andrews. Borucki has appeared in only two games in 2019. ... 3B Vladimir Guerrero Jr. and 2B Cavan Biggio were both got the day off.

Rays: A starter has not been announced for Friday night's game at Seattle.