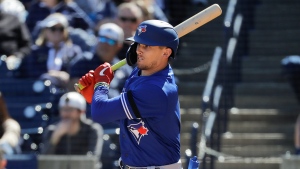 Toronto Blue Jays' Cavan Biggio follows through on a single during the fourth inning of a spring training baseball game against the New York Yankees Saturday, Feb. 22, 2020, in Tampa. (AP Photo/Frank Franklin II)

TAMPA, United States - Trent Thornton pitched two scoreless innings as the Toronto Blue Jays earned a 2-1 road win over the New York Yankees on Saturday in their first contest of the exhibition season.

Thornton, who's vying for a spot in Toronto's rotation, got the start for the Jays. He allowed just one walk.

Anthony Alford singled and stole three bases for Toronto, including home in the seventh inning.

Toronto takes on the Minnesota Twins on Sunday.