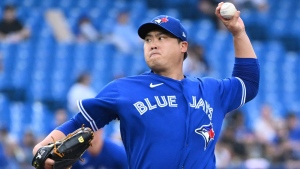 Ryu is expected to be out for 12 to 18 months following the procedure.

Ryu may not play for Toronto again as his contract expires next year, and possibly before he's recovered from surgery.

The 35-year-old Ryu has a 3.27 earned-run average and a 75-45 record over nine seasons in Major League Baseball.

He struggled in his six starts this season, with a 5.67 ERA and two wins.