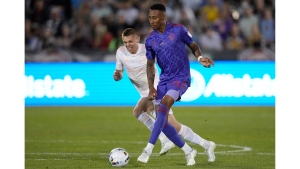 To get Kaye, Toronto gave up teenage Canadian midfielder Ralph Priso, up to US$1.05 million in general allocation money, a 2023 international roster spot and a first-round MLS SuperDraft pick.

“We are very excited to add Mark to our team,” Bob Bradley, Toronto's coach and sporting director, said in a statement. “Over the past five seasons Mark has established himself as one of the better two-way midfielders in the league. He's an intelligent player who likes to be around the ball, a good passer, ball-winner, competitor and teammate.

“We wish Ralph all the best in Colorado. He's a great young man with a bright future ahead of him.”

The deal brings the 27-year-old Kaye back to his native Toronto, where he started with the TFC academy in 2013. It also reunites him with Bradley, who had him for three and a half seasons at Los Angeles FC before selling him to Colorado last year.

Kaye made 92 appearances with LAFC, joining the club for its 2018 inaugural season and helping the club to the Supporters' Shield in 2019 when he was named to league all-star game. In signing Kaye to a LAFC contract extension in December 2018, Bradley called him a “really important player.”

Still, he sent Kaye and a 2022 first-round draft pick to Colorado in a blockbuster deal in July 2021 that netted LAFC US$1 million in general allocation money and a 2022 international roster slot. LAFC was to receive additional allocation money if Kaye reached certain performance incentives.

The move to Colorado reunited him with Rapids head coach Robin Fraser, a former Toronto assistant under Greg Vanney.

Kaye signed a contract extension with Colorado in January that runs through 2025 with a club option for 2026.

Kaye is making $700,000 this year, according to figures released in April by the MLS Players Association.

In 109 MLS regular-season games over five seasons, he has 13 goals and 21 assists.

A new foundation is taking shape in Toronto with a midfield trio of captain Michael Bradley, Jonathan Osorio and Kaye in Bob Bradley's preferred 4-3-3 formation.

Kaye, who has won 35 caps for Canada, will provide stability alongside Michael Bradley, Bob's son. He will also help Toronto move the ball quickly, accelerating the attack.

Italian star Lorenzo Insigne, currently sidelined with a calf injury, is expected to occupy the left side of Bradley's three-man attack with Spanish forward Jesus Jimenez or Canadian Ayo Akinola at the tip of the spear. Italian international Federico Bernardeschi, out of contract with Juventus, has been targeted by TFC and would occupy the right side of attack.

There is more work to do in defence with star centre back Carlos Salcedo possibly returning to Mexico for family reasons. But fellow Italian Domenico Criscito adds experience and savvy, able to play left back and centre back.

Kaye, who spent two years at York University in Toronto before joining the TFC academy, left the Toronto system in 2015 to play for Louisville City in the USL

He has three goals and one assist in 17 games this season. .

Priso is a Canadian youth international who played at the FIFA U-17 World Cup in 2019 in Brazil.

The 19-year-old from Toronto became the 25th player in TFC history to sign with the first team from the academy, when he signed as a homegrown player in October 2020.

“Ralph is one of the most talented, young midfielders in MLS,” Padraig Smith, Colorado's executive vice-president and general manager, said in a statement. “We're delighted to welcome him to the club and believe he can develop into a core piece of our team's midfield with his skill set.

“Mark played an important part in our team's rise to the top of the West last season and was a model representative of our club off the pitch. We're grateful to him for his contributions and wish him all the best in this next chapter of his career.”

Priso, an excellent passer, has appeared in 10 league games this season - and 33 appearances and two goals in all competitions over three seasons.

Toronto, which finished second-last in the league last year with a 6-18-10 record, has seen 21 members of last year's first team depart.