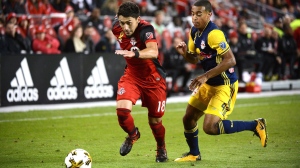 Just 24, the Californian has already played 182 MLS regular-season and playoff games with all but 37 of those in Toronto colours. But his future with the franchise was put in question after Delgado, entering the last year of his contract, tweeted “Final year, let's enjoy it” during pre-season in late January.

“Marky is a talented player ... Marky's been a really big part of the success of TFC. And age is on his side as well,” Curtis added. “He's young, he stays healthy, takes care of his body.

This report by The Canadian Press was first published April 30, 2020.