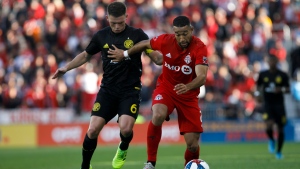 Toronto came into the final day of the MLS regular season in sixth place, needing to beat Columbus and have D.C. United and the New York Red Bulls stumble in order to climb into fourth in the East for a first-round home playoff game.

The planets aligned for Toronto FC. Alejandro Pozuelo did the rest.

The Spaniard scored on an elegant free kick to give Toronto FC a 1-0 win. Elsewhere the Red Bulls fell 3-0 in Montreal and D.C. United had to settle for a scoreless draw at home against nine-man FC Cincinnati.

Put it all together and Toronto (13-10-11) went from sixth to fourth, finishing above D.C. United on goal difference. TFC and D.C. United (13-10-11) will meet at BMO Field on Oct. 19 or 20 with the winner facing conference-leading New York City FC in the Eastern semifinals.

The lone fly in the ointment was seeing star striker Jozy Altidore walk off gingerly in the 70th minute after being clattered in a goalmouth collision.

“We don't quite know where he's at. We'll have to see from an MRI what it looks like and what the timeline might be or how we deal with it,” he added.

Toronto has two weeks before it plays again. U.S. team officials will also be monitoring their big man given an Oct. 15 CONCACAF Nations League match with Canada at BMO Field.

Altidore (with 11 goals) and Pozuelo (12) have combined for 23 of Toronto's 57 goals. Fourteen other players have also scored but none has more than six goals.

A physical presence, Altidore disrupts defences and creates space for others as well as score goals.

In many ways, Toronto goes as Altidore does - something team president Bill Manning noted before the game in a question-and-answer sessions with season ticket-holders.

“One of the things we're finding is when the big guy doesn't score, we're in trouble,” Manning said.

Finding a second goal-scorer will be a team priority in the off-season, he added.

Fingers will be crossed in TFC offices while doctors examine Altidore.

“I had a feeling that if we could take care of business here, that given the way things could play (out) in Montreal and D.C., we'd have a real chance,” said captain Michael Bradley. “To have a few things fall into place for us and to get a home game to start the playoffs is huge.”

“This place comes alive in October, November. So what it means is we get one night to set the playoff tone here,” he added.

Despite the disappointing draw Sunday, D.C. United is unbeaten in its last five outings (3-0-2), outscoring the opposition 6-0 during that run.

A moment of brilliance from Pozuelo in the 57th minute ended a scoreless deadlock after Altidore was taken down just outside the penalty box. The Spaniard coolly slotted the ball over the Columbus wall and into the corner of the goal, delighting the announced crowd of 23,692.

Seven teams make the post-season in each conference. The top team in the conference has a first-round bye while No. 2 through No. 4 host playoff games against lower-ranked teams.

“A home playoff game really means the world,” said goalkeeper Quentin Westberg. “We all know BMO (Field) is something special.”

While Toronto had more of the ball in the first half, Columbus (10-16-8) had better scoring chances early. Westberg was called upon twice when long balls came in over the Toronto defence, with the offside flag going up on the first chance.

Curacao 'keeper Elroy (pronounced: AY-loy) Room made two marvellous back-to-back saves in the 36th minute after a Columbus clearance deflected to Altidore at the edge of the penalty box. A diving Room got a hand to Altidore's shot and then got back up to somehow deny Bradley, who seemingly had an open goal prior to Room's acrobatics.

Columbus, which saw its five-game unbeaten string snapped, had lost just once in its previous 12 league matches (5-1-6) since mid-July.