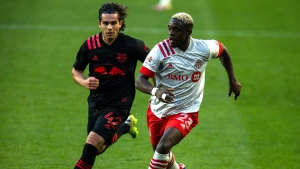 HARRISON, N.J. - Toronto FC heads into the MLS post-season with more than a little uncertainty, continuing the theme of its topsy-turvy, nomadic 2020 campaign.

Toronto will be doing it without the Supporters' Shield, denied the trophy by its 2-1 loss to the New York Red Bulls and rival Philadelphia's 2-0 win over New England on Decision Day Sunday. The Shield goes to the MLS team with the best regular-season record.

No. 7 Nashville faces No. 10 Inter Miami and No. 8 New England takes on No. 9 Montreal. Philadelphia will meet the lower advancing seed while Toronto faces the higher advancing seed.

And TFC isn't sure where it will be spending its time ahead of the playoffs.

The Toronto travelling party headed home after Sunday's match in Harrison, N.J., hoping a deal can be struck with local authorities to allow the team some modified training north of the border.

If not, players and staff will spend a couple of days in quarantine with loved ones before returning to Hartford to practise although coach Greg Vanney said the team was looking at several options.

While others get to prepare at their training ground, TFC has been training at three different pitches in the Hartford area - one of which Vanney described as “basically like a beach.”

Toronto (13-5-5) needed to pick up more points than Philadelphia (14-4-5) on the day to claim the Shield given the two were tied on points and wins. The Union also held the edge in the relevant tiebreaker of goal differential per match.

“We've set out every year to try to be a team that can compete for the Supporters' Shield,” said captain Michael Bradley. “But the reality is also that once the regular season ends, you have to quickly understand that everything starts over.

“And while the Supporters' Shield means a lot and is certainly something that is important to us as a club â€¦ everybody also understands that the reality is still (that) the biggest prize is the MLS Cup. It's the one that everyone remembers.”

Sunday's result means Toronto goes into the playoffs having lost three of its last four games (1-3-0). The plus side is the club is getting healthier.

Star striker Jozy Altidore, who had missed the last seven games, came on in the 57th minute. Midfielder Jonathan Osorio, who sat out the last three matches, saw 45 minutes of action.

But fullback Richie Laryea lasted just 41 minutes before limping off with a minor groin injury.

The Supporters' Shield carries with it home-field advantage throughout the playoffs as well as a US$150,000 prize. For Philadelphia, in claiming its first-ever trophy after finishing runner-up in the U.S. Open Cup in 2014, '15 and '18, it also means a berth in the 2021 Scotiabank CONCACAF Champions League.

A 5-0 defeat in Philadelphia on Oct. 24 and a 1-0 loss to New York City FC four days later in Hartford cost an injury-ravaged Toronto in the standings. The Union let Toronto back in the hunt by losing 2-1 in Columbus last weekend.

Still, Toronto delivered a fine showing to finish runner-up in the 26-team league over a pandemic-rejigged campaign that forced it to play all but four of its 23 regular-season games away from BMO Field, with six in East Hartford.

“As I said to them before the game, I'm extremely proud of the way they have handled the season,” Vanney said of his players. “It's been a challenging year in many, many ways for everybody around the world.”

“Our guys, every single day, came out to training and didn't complain, didn't moan. They just got to work,” he added. “They found ways to support each other and to get on with it.”

The Red Bulls, who came into the game in seventh place in the East, attained their goal of moving up into sixth and thus avoiding the play-in round. Interim head coach Bradley Carnell praised his team's efforts in the first half, calling it one of its best efforts of the season.

Trailing 2-0 after 45 minutes, a different Toronto side came out to start the second half and pulled a goal back five minutes into the half. But the Red Bulls absorbed the pressure and kept their heads.

Barlow scored off a corner with White flicking the ball on to the far post. Barlow rose above Chris Mavinga and headed the ball in for his third of the season in the 24th minute. Toronto had six defenders inside the six-yard box at the time.

The Toronto defence was ripped apart again two minutes later when fullback Kyle Duncan was left uncovered as he headed towards the penalty box. He sent the ball across the goal for an unmarked White to tap it in. It was the fifth goal of the season for White and the fourth in his last five matches.

Endoh pulled one back for Toronto in the 50th, knocking in the rebound after Ryan Meara made a fine save off Nick DeLeon, who sidestepped a defender to make room for the shot.

Outshot 8-1 in the first half, Toronto had a 13-0 advantage in the second half.

For Vanney, it was a reminder to his players that at this time of the season “the game can't always look as pretty as we want it to look.”

This report by The Canadian Press was first published Nov. 8, 2020.