Toronto FC gets early start to playoffs with noon kickoff against D.C. United 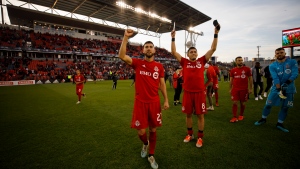 Toronto FC will have an early start to the MLS playoffs, with its first-round match against visiting D.C. United kicking off at noon local time on Oct. 19.

Toronto moved from sixth to fourth place in the East on the final day of the regular-season Sunday, earning the right to host the game after beating Columbus 1-0 and seeing D.C. United tie nine-man FC Cincinnati 0-0 and the New York Red Bulls lose 3-0 in Montreal.

The first round goes Oct. 19 and 20, with MLS announcing exact times Monday.

The winner of the Toronto-D.C. United game advances to meet New York City FC, the top seed in the East, on Oct. 23 at either Yankee Stadium or Citi Field depending on the Yankees' progress in the baseball playoffs.

Despite Sunday's disappointing draw, D.C. United is unbeaten in its last five outings (3-0-2), outscoring the opposition 6-0 during that run.