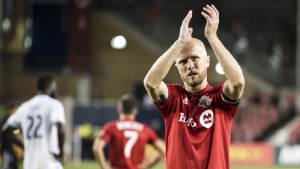 in MLS soccer action in Toronto, on Saturday, August 10, 2019. A home playoff game is on the line as Toronto FC, unbeaten in nine league games (3-0-6), looks to beat Columbus Crew SC and climb past the New York Red Bulls and D.C. United in the Eastern Conference standings as the MLS regular season come to a close Sunday. THE CANADIAN PRESS/Christopher Katsarov

Toronto FC goes into the final weekend of the MLS regular season knowing it is playoff-bound but uncertain of where and against who.

Currently sixth in the MLS Eastern Conference, Toronto (12-10-11) could finish anywhere from fourth to seventh. Jumping to fourth, which would require a Toronto win Sunday against visiting Columbus (10-15-8) and help from other quarters, would mean hosting a first-round playoff game. Otherwise Toronto will open on the road Oct. 19-20.

No one in TFC colours seems to be sweating the permutations.

“I'm not really worried about scenarios. I'm just trying to go out Sunday and win the game and end the regular season on a good note,” said forward Jozy Altidore.

Coach Greg Vanney sees Sunday as a final preparation game for the playoffs.

“We're going to focus on ourselves,” he said after training Friday. “Look, if we win the game (Sunday) then we can't control anything else beyond that. We'll see where we're at.”

Seven teams make the post-season in each conference. The top team in the conference has a first-round bye while No. 2 through No. 4 host playoff games against lower-ranked teams.

If the standings remain the same, Toronto will open at Philadelphia. The first three tiebreakers are wins, goal differential and goals scored.

Toronto could host a first-round game or find itself headed to Atlanta, D.C. United, the New York Red Bulls or Philadelphia.

Under the league's revamped playoff format, finishing fourth or fifth means facing top-seeded New York City FC on the road in the conference semifinal if you survive the first round. Placing sixth or seventh would leave Toronto in the other half of the playoff draw.

Altidore is ready for anything.

“I just think the East is open ... There's no team out there that really screams out to me that it's so dreadful to go there and play on the road,” he said. “Obviously it's not going to be easy, you prefer to play at home but I'm not losing sleep over it.”

“There are some good teams but I do think there's a lot of teams that can beat each other and the margins are really fine for everybody. And so the execution of one play here or there or some details here or there are really the difference of getting where you want to go.”

That is particularly true of Toronto, which has had to settle for 11 ties this season. Only New England and Chicago, with 12, have more. Six of Toronto's ties have come during its current nine-game unbeaten streak (3-0-6) in league play, a run that dates back to early August.

“I think through this stretch one of our takeaways is that we can get results in any of these stadiums,” said Vanney. “Through this stretch there's probably three or four plays we wish we had back and we would have had a lot more points under our belt.

“But nevertheless the mentality of the group is spectacular, the confidence of the group is high, the clarity is there. Those things are important when you come down the stretch. This is why over the history of the league the last 10 games (of the regular season) are always a pretty good predictor of how teams will do in the playoffs.”

While it took Toronto much of the season to assemble all its weapons, captain Michael Bradley says the team is headed in the right direction.

“We feel good,” he said. “There's always room for improvement, though.

“We think we continue to get better every week. We all feel like we're just scratching the surface for what there can be. It's been a good stretch for us but nobody's sitting around feeling like we've reached our peak. Not even close.”

TFC players and staff had an interesting week with the team's north Toronto training centre hit by a power failure for a couple of days.

“It was colder, I can tell you that,” Altidore said with a chuckle.

Columbus is unbeaten in its last five (3-0-2), a run that includes wins over Atlanta and Philadelphia. It has lost just once in its last 12 league matches (5-1-6) since mid-July.

BEZ'S BACK: The game marks the return of former TFC GM Tim Bezbatchenko, now president and GM of Columbus.

HEALTH UPDATE: Toronto reports all its players are available for selection.