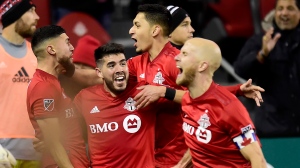 Toronto FC training was all over the place Monday.

Striker Jozy Altidore, nursing a quad strain, worked out on his own on a field away from the main squad during the portion of practice open to the media. Centre back Chris Mavinga, who exited Saturday's 5-1 extra-time win over D.C. United in the 107th minute due to an ankle issue, and Brazilian fullback Auro left practice early. Midfielder Marky Delgado was said to be working indoors.

All that's missing is glue and some string as coach Greg Vanney tries to piece together his roster for Wednesday's MLS Eastern Conference semifinal against host New York City FC. NYCFC, which finished the regular season 14 points ahead of Toronto, has been off since the regular-season finale Oct. 6 by virtue of finishing first in the East.

“He's got to, again, continue to accomplish some things,” said Vanney. “Today we got him up to a higher speed than we have before and we'll see where this goes.”

That could mean another game up front for Spanish playmaker Alejandro Pozuelo, who scored three of his 12 goals this season against NYCFC.

The good news was that centre back Omar Gonzalez, who like Altidore sat out the D.C. United game, was on the training field in his return from a hamstring issue.

Gonzalez did some fitness work with the main group Monday. “We'll see how he progresses the next two days,” Vanney said.

Mavinga and Delgado were doing “normal recovery stuff.” There was no word on Auro, but several of the players left training to work on their own.

While the Yankees are now out of the baseball playoffs, the decision had already been made to shift Wednesday's game to Citi Field. NYCFC has played at the home of the Mets once before, in the 2017 regular-season finale.

Vanney says he expects the field dimensions to be the same tight fit as Yankee Stadium, although the stands are closer to the playing surface.

“I don't know anything about the grass or anything like that,” he added. “We assume that it will be very similar to Yankee Stadium.”

Toronto took four of six points off NYCFC this season.

TFC blanked visiting New York 4-0 in March 29 when Pozuelo made a dazzling debut with two goals and an assist. The teams tied 1-1 at Yankee Stadium on Sept. 11 - during a FIFA international window - thanks to a Pozuelo penalty although the Spaniard missed a second attempt from the penalty spot in the 78th minute.

Vanney wants his team to control the tempo and deny NYCFC the ball on the smaller playing surface.

“The field and the players and everybody are a lot closer together on that field than normal so it's imperative that when we have the ball, we really really get all the way to the sidelines and maximize,” Vanney said. “There's very little space to waste and the games happen fast.”

The more confined playing surface means decisions have to be made quicker, he added.

Toronto modified one of its training fields to the same dimensions to help get accustomed to it.

Toronto is 0-2-4 all-time on the road against New York City FC although it won big there in the 2016 playoffs, clobbering NYCFC 5-0 at Yankee Stadium to complete a 7-0 aggregate victory in the then-two-legged Eastern Conference semifinal.

“I feel it's going to be neutral field for both teams,” said goalkeeper Quentin Westberg. “It's another baseball field but we're ready. We'd much rather be worrying about what to expect on Wednesday than be on vacation.”

Both teams are in good form.

NYCFC has lost just once in its last 11 league games (8-1-2) dating back to mid-August.