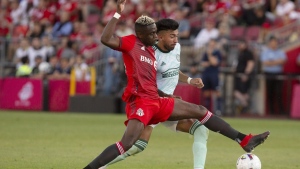 TORONTO - It has been a tough year for Toronto FC but with steady improvement has come an increasing level of confidence within the team.

Coming off a 4-0 win against CF Montreal in the Canadian Championship semifinals on Wednesday, Toronto was able to build on that momentum, besting Atlanta United 2-1 on Saturday, courtesy of Ralph Priso's 78th minute winner.

“You could see there is a growing level of confidence. I like the fact that in the second half, when we just needed to find a way to come back after giving up the goal, and get a goal - it was a smart play,” Toronto FC head coach and sporting director Bob Bradley said after the match.

“We weren't having success on the corners going direct, so (Alejandro Pozuelo's) decision to play it to Michael (Bradley) was a smart one, and Ralph scores a great goal.”

Entering the match, Toronto had won just one of its last eight Major League Soccer games, with the lone victory coming against the Chicago Fire at home on May 28.

Jonathan Osorio opened scoring in just the eighth minute of the game for Toronto, when he took a pass from Jayden Nelson into the box, beat his defender and put it past Atlanta goalkeeper Rocco Rios-Novo.

And the pressure didn't stop there from Toronto, despite being unable to find the back of the net for the remainder of the half.

In the 12th minute, Nelson advanced the ball up the field, eventually finding Osorio going down the left side but the ball went out of bounds as he attempted to beat his defender by the goal line boundary. He again missed two minutes later over the top of the net.

Forward Jesus Jimenez, one of the top scorers in the MLS, missed on a few opportunities of his own, with a number of those coming in the box with teammates threading passes to him with every streak down the field.

“One of the things I liked about the first half is that I thought we were smart in picking moments to press,” Bradley said. “We didn't extend ourselves crazy, but when we saw the chance, we collectively went after them in a smart way.”

Atlanta had difficulties of their own, as they had trouble capitalizing on corners and free kicks with Toronto's line of defence holding its own.

In the second half, Atlanta found their moment of opportunity as Luiz De Araujo ran down the right side of the field, past his defender and beat Toronto's Quentin Westberg to tie the game 1-1.

However, Atlanta (5-6-4) failed to hold the momentum as Toronto found a way to regroup and press for further opportunities.

Jacob Shaffelburg, who entered the game in place of Jimenez in the 67th minute, had his shot blocked near the net, as did Deandre Kerr in the 75th- and 78-minute marks.

Moments later, Bradley attempted a pass to Jahkeele Marshall-Rutty, which was tipped and found its way to Priso who struck the ball from the centre of the box to put Toronto up for good.

Toronto (5-8-3) has now improved to 5-3-0 at BMO Field in MLS play, where the team has enjoyed the vast majority of its success this season.

“I can't speak for everybody, but personally â€¦ I feel like I play my best games at BMO,” Priso said. “I don't know but I just play better when we play here. It's just something that you can't explain.”

Italian international Lorenzo Insigne was in attendance for the game, as the crowd of 25,527 gave him an ovation when he was shown on the big screen. The 31-year-old who signed with Toronto FC earlier in the year, was formally introduced to the fans on Friday. He is expected to make his debut on July 9.

Toronto FC will next host the Columbus Crew on Wednesday as the team continues its five-game homestand.

This report by The Canadian Press was first published June 25, 2022