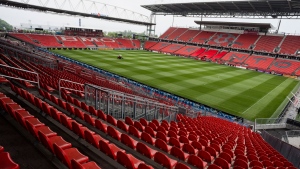 Toronto FC, whose defence ranks worst in the league, is now running out of forwards.

Ayo Akinola, Jozy Altidore, Dom Dwyer and Jordan Perruzza are all out injured and unavailable for Wednesday's game against visiting FC Cincinnati. Spanish playmaker Alejandro Pozuelo, who has missed the last five games with a lower body injury, will also sit out - as will midfielders Ralph Priso and Tsubasa Endoh.

“It hasn't just been this week. I think we've been very tight (on resources) the whole season,” said Perez, who took over from the fired Chris Armas on July 4.

Perez prefers to see the glass half-full, especially since Toronto (4-15-7) is unbeaten in its last three games in all competitions (2-0-1).

“I want to focus on the players that are available because I'm very happy the way we are working, the way we are playing,” said the Spaniard. “We just focus on the positives and we have a whole team in the background working hard to support these (injured) players to get back into the game as soon as possible.”

Some won't be back for a while. Achara, Altidore, Priso and Endoh are all recovering from surgery.

Toronto will be facing a Cincinnati team (4-13-8) looking to show something in the wake of Monday's firing of coach Jaap Stam. Former TFC defender Tyrone Marshall is the Cincinnati interim coach.

“We'll have to be very very alert because we know the players are going to come here hungry, trying to prove a point,” said Perez.

He should know. Toronto upset league-leading New England 3-2 on July 7 in his first game at the helm, snapping a six-game losing streak.

Marshall, who played 362 MLS regular-season and playoff games for five teams from 1998 to 2012, had been in charge of Cincinnati's under-19 and under-23 teams.

He joined Toronto in June 2007 in a trade with the Los Angeles Galaxy, playing 16 games for TFC in 2007 and 24 in 2008 before being traded to Seattle in February 2009. He joined the Cincinnati academy coaching staff in February 2021 from Real Salt Lake, where he had been an assistant coach.

Cincinnati stands 13th in the Eastern Conference, one-point ahead of cellar-dwelling Toronto.

Cincinnati, a third-year team that finished last in the standings its first two years, has won just two of its last 17 league outings (2-8-7). But both of those wins came over TFC (2-0 on June 26 in Orlando and 2-0 Sept. 11 in Cincinnati).

Cincinnati has lost three straight and been outscored 10-3 since its last win over Toronto.

“If you let them play, they're going to hurt you because they have quality,” said Perez, citing Brazil's Brenner, Costa Rica's Allan Cruz, Ghana's Isaac Atanga and Argentine playmaker Luciano Acosta. “On the other side, probably their weakness or the point that is not as strong is the defence and that's the part we have to try to exploit.”

Toronto won't have to worry about Atanga. On Tuesday, the MLS disciplinary committee suspended him for an additional match resulting from his Sept. 18 red card for serious foul play against New York City FC.

On the plus side for Toronto, captain Michael Bradley returns after a one-game suspension due to yellow card accumulation. And Perez says Pozuelo may be able to play some minutes on the weekend.

Perez has Ifunanyachi Achara and Patrick Mullins as forward options. He has also deployed Venezuelan Yeferson Soteldo as a false No. 9 while pacey Canadian winger Jacob Shaffelburg offers offence off the wing.

“When you play without strikers, you can imagine what is the outcome â€¦ but I think the team is making a good effort, a big effort to adjust and find other ways to generate goal-scoring opportunities,” said Perez. “It's going to be a collective effort.”

While 18 different TFC players have scored in league play this season, 10 of those only have one goal and midfielder Jonathan Osorio (four) and the injured Akinola (three) are the only ones with more than two.

Soteldo, who has two goals and seven assists in 20 games, leads the team in shots (38) and shots on goal (14). No other TFC player has managed double-digit shots on target (fullback/wingback Richie Laryea is second with nine).

Toronto is coming off a weekend 0-0 draw in Colorado, having previously blanked York United FC 4-0 in Canadian Championship play and edged Nashville SC 2-1, both at home. The Sept. 18 win over Nashville snapped a six-game league losing streak and nine-game winless run (0-7-2) that dated back to Aug. 1.

Wednesday's game is Toronto's sixth in all competitions since Sept. 11. TFC hosts Chicago on Sunday before the international break, with its next game Oct. 16 against visiting Atlanta.

The cap on attendance at BMO Field has been raised to 21,000, from the previous 15,000 by local health authorities.