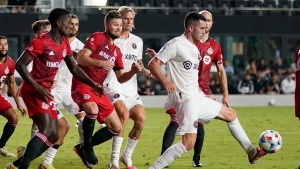 Toronto FC has gone 5-9-6 since first-year coach Chris Armas was fired July 4 after a disastrous 7-1 loss to D.C. United.

And while there have been improvements, the man who succeeded Armas is candid about where the 6-17-8 team is today.

“I have mixed feelings, if I'm honest with you,” said Javier Perez, who was elevated from assistant coach to run the team for the rest of the season. “Because I think some games, we (do) well. Sometimes we take two steps forward, one backward, or two backward, one forward.

“I don't like to give excuses,” the Spaniard added. “But every time that something seems to click in a positive way, we have some setback. Meaning we have injured players, we cannot run the same starting lineup in the next game. All these situations make it really difficult for the team to gain some momentum and have some stability.”

Perez, whose future as head coach is unclear, says all he can do is “hold onto the last performance.”

“And the last performance, I think, has been really good. It's been positive. I think the team played well.”

That momentum - from scoring late to secure a 1-1 weekend tie with CF Montreal - will be tested Wednesday with the visit of the Philadelphia Union, who are 23 points ahead of Toronto in the standings.

With 49 points and three games remaining, Jim Curtin's team is in a dogfight with Nashville (49 points) and Orlando (47 points) for second place in the Eastern Conference behind Supporters' Shield winner New England (70 points).

Curtin called TFC “a team that has a lot of talent, a lot of strong players.”

“Another tough test for us â€¦ The table in our league doesn't matter at this stage of the year in terms of anybody can still beat anybody. So if we go there and don't have the right mindset, guys like Jozy (Altidore), (Alejandro) Pozuelo and Michael Bradley can kill you.”

The tie with Montreal snapped a two-game losing streak that saw TFC blanked 3-0 by Inter Miami and 2-0 by Atlanta.

Toronto plays at seventh-place Atlanta on Saturday before hosting Pacific FC on Nov. 3 in the Canadian Championship semifinal. TFC will then wrap up the regular season at home to ninth-place D.C. United on Nov. 7.

Both Atlanta and D.C. United have post-season hopes, so have plenty to play for.

On the plus side, defender Kemar Lawrence is healthy again, which means Perez may return Bradley to his normal midfield position after a one-game stint at centre back.

Given his selection for Friday's media availability, Quentin Westberg will likely start in goal for a second straight game.

The Union will be without star goalkeeper Andre Blake, who has returned to Jamaica in the wake of his grandmother's death. Ilsinho, Cory Burke and Alvas Powell are injured with Curtin saying Brazilian forward Sergio Santos, who scored a hat trick against Toronto last season, could see limited action Wednesday if needed.

While not a win on the weekend, the Toronto's tie with Montreal was a feel-good point with Altidore securing the point with a 95th-minute strike from a free kick. It was the third direct free kick goal of his MLS career and the first since 2019, also against Montreal.

The 31-year-old Altidore has been restricted to three goals in 13 league appearances this season, including five starts, thanks to injuries and a falling out with Armas that saw him on the outs with the team for more than seven weeks.

The burly striker, who underwent surgery on his right foot on Aug. 19, says he's finally healthy.

“To be honest I feel the best I've felt in a long time,” he said after the Montreal game. “I kind of paid the price (for) playing with some injuries, with some broken bones here and there. Eventually they catch up to you. But to be able to have the surgery and my foot's starting to feel much much better. Just to be able to run and not feel pain is a huge boon. I'm just excited about that and just taking it day by day. But I feel so much better now, finally.

“I just want to play. And I missed the game. I'm just disappointed about how this year has gone. â€¦ I just feel better, man. To run and move around without pain, it just feels amazing because it's been a while. I'm just very very happy and I just thank God for that.”

The Union blanked visiting Toronto 3-0 in August in the teams' first meeting this season. The two split the series last year, with Toronto winning 2-1 in East Hartford and Philadelphia romping to a 5-0 victory at home.

Philadelphia's 2-1 victory in May 2019 at BMO Field snapped a five-year TFC undefeated streak in the series. Philadelphia's previous win over Toronto was in September 2014 at BMO Field with TFC winning eight of the 10 matches in-between, with two draws.

Whatever happens in its last three league matches, Toronto is suffering through its worst season since 2013 when it went 6-17-11.

Toronto ranks 26th in the league in goals conceded, averaging 1.94 goals a game, and is tied for 22nd on offence, scoring 1.13 goals a game on average. Only Cincinnati has given up more goals (64) than Toronto (60).