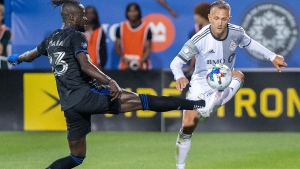 “Both are excited (to play),” head coach Bob Bradley said. “And everybody's also excited to get them going. (With only) a couple days of training, we'll have to figure out exactly what it means in terms of minutes, things like that, but both of them are ready to go.”

Added captain Michael Bradley, Bob's son: “It's been great in every way. They have come in and just established right away how excited they are to be here, what good people they are, first and foremost. What good professionals they are. How serious they are and how motivated they are about being here And of course, when training starts you can see the quality”

For both Bradleys, Bernardeschi and Insigne are two more important pieces in the puzzle.

With the addition of Canadian midfielder Mark-Anthony Kaye, via trade from Colorado earlier this month, Bob Bradley likely has his starting midfield and attack set.

The defence remains in need of help, given it ranks 26th in the league in conceding 1.86 goals a game on average. Toronto added experience on Friday in the form of Canadian international defender Doneil Henry, waived earlier this month by Los Angeles FC.

The 29-year-old from Brampton, Ont., who signed through the rest of the season, came up through the TFC academy and became the first homegrown player to sign with the first team in 2010 as a 17-year-old. In five seasons with Toronto, Henry made a combined 93 appearances.

“Doneil has good experience in the league and can provide us with some backline depth,” Bob Bradley said in a statement Friday.

Henry has won 44 caps for Canada.

The Italians bring experience, skill and style. Bernardeschi, Criscito and Insigne have combined for more than 1,200 appearances in Europe and some 120 Italian caps.

“There's a reason that those guys have such a high profile,” said Toronto goalkeeper Alex Bono. “You see it just in terms of quality as soon as they step on the field.”

The trio's star power is hard to miss.

“There seems to be a buzz even around the training facility, with the guys,” Bono said with a smile. “Everyone wants some extra tickets. Everyone's family wants to get a piece of the action (Saturday).”

It's the first-ever meeting between Toronto and Charlotte. And for Toronto, the game comes three days before the Canadian Championship final against the Whitecaps in Vancouver.

Somehow it seems fitting that Toronto will be facing an Italian coach with both Charlotte (interim coach Christian Lattanzio) and Vancouver (Vanni Sartini).

“Listen, Toronto has always been a tough team to play against. There is a real football enthusiasm and culture behind the club,” said Lattanzio. “The signings that they've made, they would be very good signings for big teams in Europe.

“And so to have Insigne, Bernardeschi, Criscito added to the squad as well as the names that they already have with Kaye, with Bradley, all the other ones, Osorio, plus a few good young players and experienced players at the back, in my opinion it's one of the best squads in MLS. So it's going to be a difficult game.”

Toronto (5-12-4) enters weekend play in 13th spot in the 14-team Eastern Conference, five places and seven points below Charlotte. With 13 games remaining in the regular season, TFC has five teams and nine points between it and the post-season.

Charlotte has conceded two or more goals in eight of 11 road games, compared to just once in its 10 home games

The team has already gone through one coach, parting ways with head coach Miguel Angel Ramirez on May 31 with the team at 5-8-1. Lattanzio is slated to finish out the season as interim head coach.

Charlotte is coming off a friendly win over England's Chelsea, prevailing in a penalty shootout after the game finished knotted at 1-1 before 52,673 at Bank of America Stadium.

Its last league outing was a 3-2 loss Saturday at Inter Miami that saw Charlotte go up 2-0 on a pair of goals by former Whitecap Yordy Reyna, only to lose 3-2 on a 93rd-minute winner by Emerson Rodriguez. That snapped a two-game win streak.

Saturday's loss in Montreal marked the seventh time in 12 matches that TFC has failed to score after having found the target in 13 consecutive games prior to that.

Jayden Nelson is available after serving a one-game suspension for yellow card accumulation against Montreal. But Toronto will be missing goalkeeper Quentin Westberg, midfielder Noble Okello and centre back Chris Mavinga, all injured.

Osorio, who missed the Montreal game, has cleared concussion protocols and is available.