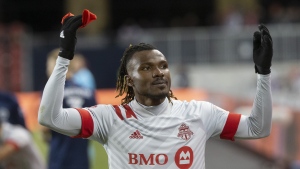 Toronto FC forward Ifunanyachi Achara (99) gestures to fans as he is taken out of the game during the last minutes second half MLS action against New York City FC in Toronto on Saturday March 7, 2020. Achara has undergone successful surgery to repair a torn anterior cruciate ligament and lateral collateral ligament in his left knee. THE CANADIAN PRESS/Chris Young

In a statement Thursday morning, the MLS club said the surgery was performed Tuesday by Dr. Tim Dwyer and Dr. Danny Whelan at Women's College Hospital in Toronto.

Achara will miss the remainder of the 2020 season.

The 22-year-old from Nigeria injured his knee in training June 26 at BMO Field when he became tangled with defender Omar Gonzalez while both attempted to get to a cross. It was one of the last plays of Toronto's first team training session at its home stadium since MLS suspended play March 12 due to the global pandemic.

Toronto returns to action Sunday at the MLS is Back Tournament against D.C. United at ESPN's Wide World of Sports complex in the Orlando area.

Achara, whose career at Georgetown University was interrupted by injury, was selected in the first round (25th overall) of the Jan. 9 MLS SuperDraft.

Despite missing the first part of training camp due to illness, he was rewarded with a contract Feb. 21 after scoring three goals in pre-season. Unable to take part in Toronto's Feb. 29 season opener in San Jose because of red tape, he scored in his MLS debut the next week to give Toronto a 1-0 win over visiting New York City FC.

This report by The Canadian Press was first published July 9, 2020.