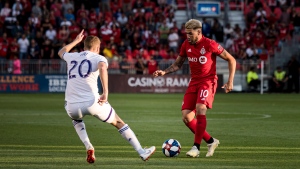 TORONTO - Patrick Mullins scored the equalizer in the 77th minute as Toronto FC played to a 1-1 draw with Orlando City SC at BMO Field on Saturday.

TFC (9-10-6) had a chance to move into the top seven in the Eastern Conference, a requirement to qualify for the playoffs, had they picked up three points. They had to settle for one.

Toronto FC has nine games remaining in the regular season.

The Reds had a couple of scoring chances in the opening half. In the fourth minute, Alejandro Pozuelo's chip from inside the box sailed just over the crossbar.

In the 28th minute, Pozuelo set up another chance for Toronto FC. His chip pass from outside the box narrowly missed Jozy Altidore inside the box. His attempt to head the ball down missed and went out of bounds.