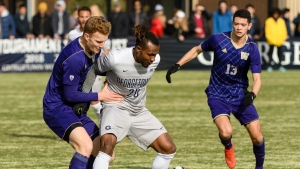 Achara, 22, was taken in the first round (25th overall) in the 2020 MLS SuperDraft out of Georgetown University.

While he missed the Orlando part of Toronto's training camp due to illness, he wasted little time turning heads in California, where the team has spent the bulk of pre-season, scoring goals against UC Irvine, Los Angeles FC and the Los Angeles Galaxy.

"Achara has had a terrific pre-season," GM Ali Curtis said in a statement Friday. "He works hard, is dynamic offensively and has a great way about him where he fits very well within the group.

"We're excited about adding him to the team as we feel he has a lot of potential."

Curtis believes Achara could have been a top-five pick had it not been for injuries that limited his play at Georgetown.

The five-foot-10, 161-pounder becomes the 29th player on Toronto's first-team roster. MLS clubs are allowed a maximum of 30.

Achara wore No. 20 at college but that number belongs to fellow forward Ayo Akinola at TFC. The rookie has chosen a famous Canadian number in 99.

Former forward Jeff Cunningham (No. 93) and current fullback Auro (96) are the only TFC players to have worn a number in the 90s.

Born in Enugu, Nigeria, a young Achara drew the attention of the Nigerian under-17 team as a right back. He failed to make the cut for the U-17 World Cup but thanks to the MTN Football Scholar program -- which connects coaches to young African talent -- he drew the attention of Berkshire School in Sheffield, Mass.

Achara headed to the U.S. at age 16, scoring 39 goals and adding 22 assists at Berkshire.

As a freshman at Georgetown in 2016, he sprained the lateral collateral ligament in his right knee and played just eight games with one goal. The next season, he sprained the ligament again with seven goals and one assist in 11 games.

He was injury-free as a junior and ranked third on the team in scoring with seven goals (including four game-winners) and one assist in 21 games. He was hurt again playing for his Black Rock FC club team prior to his senior season, with a sprained left meniscus requiring surgery.

The Hoyas co-captain missed the start of the 2019 season but came back strong with six goals and five assists in 15 games, only to sprain his ankle in the NCAA playoffs. He saw limited action after that but came on as a substitute in the Hoyas' epic 7-6 penalty shootout win over Virginia in the College Cup final in December.

Achara goes by his last name, given his first name is a mouthful. For those wondering, it is pronounced ee-fuh-nawn-YATCH'-ee.